By Teri Carnicelli
When local Girl Scout Troop 1629 decided to pursue its Silver Award, one troop member knew immediate what she wanted to focus the project on–the plight of the monarch butterfly. 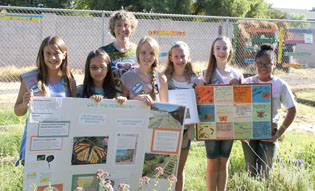 “In recent years, the numbers of monarchs have declined by as much as 30 percent because of the use of pesticides and herbicides and the decrease of the food supply for the young monarch caterpillars—that being milkweed,” pointed out Penny Spivey, who has always loved the bold colors of the monarch butterfly.

She thought it would be good to focus the troop’s project on not only educating the public about the decline in the monarch’s numbers but how Phoenix residents can help the struggling butterfly’s numbers grow.

“We developed a plan to increase the population and support the great migration of the monarchs, a 3,000-mile journey from Mexico to Canada,” Penny explained. In order to achieve this, the six members of the troop who participated in the project focused on increasing the amount of native Arizona milkweed plants, both through planting them in a local school garden as well as selling the plants at school events and the Central Farmers Market earlier this year. Visitors to their table at the farmers market were given information on how they can plant milkweed in and around their own homes to attract and nurture monarch butterflies.

“Each region has its own milkweed, so for this project we planted a native milkweed,” Penny said. The girls worked closely with Mitra Khazai, chair of the DIGGS gardening program at Madison Simis Elementary. Milkweed was planted in several of the garden sites on campus.

As part of their Silver Award project, the girls put together binders with laminated pages that could be used as lesson plans for various grade levels at Madison Simis. Tasks were divided among the six troop members, such as creating a map page of the butterfly’s migration pattern, and a “How I Can Help” page with tips and ideas for people to use.

They also created a plaque with colorful, hand-painted tiles that will be mounted on the north wall of the school, opposite on of the DIGGS gardens.

The Silver Award is the highest award a Girl Scout Cadette can earn. Girls must be in sixth, seventh or eighth grades. The sixth-grade girls from Troop 1629 were presented with their Silver Award pins and patches by Troop Leader Lori Terauds during a special presentation on June 14 in the Madison Simis DIGGS garden.

The girls also gave Khazai part of the proceeds of their milkweed sales, which Khazai said she will use to purchase plastic models of the four stages of development of the monarch butterfly.

“With the binders and the great information these girls have put together, children here at the school will be able to learn about the monarch’s struggle and do something powerful with that information,” she said.