Angel Baltazar is going through one of the hardest times in his barely 20 years of life. His father was diagnosed with terminal cancer and the doctors don’t expect he will have much longer to live.

Angel’s dad wants to make sure that his son’s future stays on the right track. That’s why he supported Angel when he wanted to get into boxing. And that’s why he’s asked Angel’s boxing coach to help him make sure his son still has a bright future ahead of him, despite what will be a devastating loss. 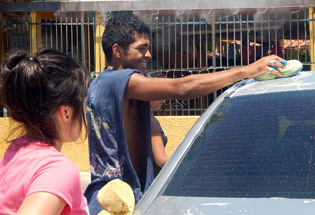 Local boxer Angel Baltazar gets some help washing cars as part of a fundraiser for his boxing gym, the Chavez Boxing Foundation, at 7th and Missouri avenues. Another car wash fundraiser is coming up on March 29 (submitted photo).

The Chavez Boxing Gym, started by former Golden Gloves Champion Pete Chavez, is more than just a youth program or a gym; for the kids and coaches, it is a family. And when someone in your family is having a hard time, everyone comes together to help.

Years ago, the foundation set up the grant in honor of one of Chavez’s former clients. Gastelum was just 17 when she died in an accident. “She was such a good kid,” Chavez remembers. “She wanted to go to college.” Her family helped him set up a scholarship in her name.

Now that grant is going to ensure Angel will go to college, even if his father won’t have the chance to see it.

Members, coaches, friends and supporters of the boxing club are helping to raise funds for this year’s grant with a car wash, set for 10 a.m. to 2 p.m. Saturday, March 29 in the parking area of Sylvia’s La Canasta, 5508 N. 7th Ave. It is in the same shopping center as the boxing gym.

The proceeds from the car wash will go directly to the grant and ultimately to Angel’s college fund.