By Teri Carnicelli
In a galaxy far, far away, a bumbling starship crew seeks out—and basically ruins—new worlds and civilizations.

“Voyage Trekkers,” a comedy series that follows the exploits of the worst crew in the Galactic Union, is expanding its own world by making the leap from the Internet to a full-length feature film—with a little help from the public. 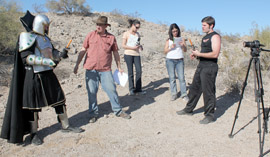 Created by writer and director Nathan Blackwell and his Squishy Studios, the show is produced with Tray Goodman’s Inside Creative Minds Media. Both men are Phoenix natives and still live in town.

“Everything is done locally; we’re all about local,” Goodman says.

Season One started out being shot around Phoenix, and each episode was 2 to 3 minutes in length. In all, there were 10 weekly episodes in the season. Season two was more ambitious, with longer episodes and the construction of an indoor film set. Both seasons are available for purchase on DVD.

Now, the Earth-based writing and production crew is hoping to make the leap to feature film, and has begun and ambitious fundraising campaign. A goal of $10,000 was set—and surpassed—last month with donations made to a crowd-funding website hosted by indiegogo.com. That money is primarily earmarked for props and costumes, and other up-front needs, explains Blackwell, who adds that deeper-pocket investors also are being sought.

“To do a feature-length film takes a lot of money and a lot of time,” Blackwell points out. “The amount of people we have working on this is big, with 20-25 people on the crew. We’d like to actually be able to pay these guys at some point.”

Blackwell says he and his co-writer are polishing up the third draft of the screenplay, which features the charismatic but impulsive Captain Jack Sunstrike (Adam Rini), with the unfazed first officer Commander Powell (Logan Blackwell), and the exasperated Doctor Rena (Gabrielle Van Buren).

For those unfamiliar with the web series, it follows the misadventures of a space-based cargo delivery ship, but the man at the helm, Captain Sunstrike, longs to be a hero even though he’s really sort of a jerk. In the feature film premise, Captain Sunstrike mistakenly is given a mission of vital importance that could see him finally achieving his dream of fame and fortune. But given his and the crew’s history, they’ll probably mess it up, like always.

“One of the reasons we want to do a feature film is we want to take it to the next level,” Blackwell says. “We keep amping it up, and we want to see more of what is possible.”

To make a donation—and possibly become and extra in the movie—and for more information about “Voyage Trekkers: The Movie,” visit www.voyagetrekkers.com. You also can follow them on Facebook at Voyage Trekkers to receive updates about the movie’s progress.