For the Hull family, “Out of Darkness” is more than just a community walk in which they are participating on Dec. 7. Finding their way out of the dark has been their own personal journey after, one year ago this month, 16-year-old Andy Hull took his own life in one impulsive moment that has left his family reeling. 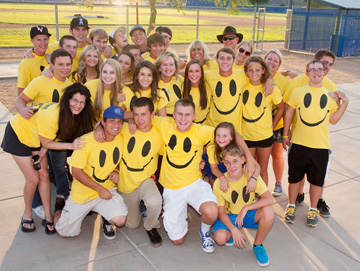 LeAnn Hull, center, wears a necklace with a photo of her son, Andy, in a small frame, as she is surrounded by Andy’s friends and supporters all wearing the Andy Hull Sunshine Foundation T-shirts. Many of them will be wearing those shirts when they participate in a suicide prevention walk on Dec. 7
(submitted photo).

LeeAnn Hull, Andy’s mother, knew her choices were to crumble or to find some way to make meaning and purpose of out all the pain and frustration. The frustration came primarily from the fact that Andy, the youngest of four, was a happy, healthy, talented left-handed pitcher who already was being scouted by universities and professional baseball teams. The idea of suicide wasn’t even in the picture … until he started taking a prescription medication for acne.

“The doctor prescribed a generic form of Acutane, called isotretinoin, which is very commonly used amongst the high school kids,” LeAnn recalls. “There was a waiver to sign, which said in a small section of the pamphlet, that suicide and depression were a possible risk factor of this drug. The doctor told us that Andy was well adjusted and happy and didn’t appear to have any signs that this might be any concern for us, so I signed.”

Within one month, Andy’s grades plummeted and he would get lost when he was driving to places that he should have known. “I didn’t think much about this as he was very busy with baseball and distracted with all the decisions he had to begin making for his future,” LeAnn explains. “He wasn’t the first teenager to have trouble with grades or lack of focus. I met with his counselor and teachers, so that we could help him through this struggle.”

Unbeknownst to LeAnn and the rest of the family, Andy’s depression and mental confusion was rapidly worsening. So on that fateful day, Andy left school after second hour, and in one impulsive, unclear moment he took his life.

“When something this devastating happens in your life, you really only have two choices. You can let it destroy you or you can find a reason to move forward,” LeAnn says.

So she started a nonprofit organization, called the Andy Hull Sunshine Foundation (http://andyhullsunshinefoundation.weebly.com), and now has more than a dozen friends and community members on the board. Some of those supporters have been colleagues she works with as secretary to the Kiwanis Club of Sunnyslope.

Some of her fellow Kiwanians will join the Andy Hull Sunshine Foundation team as it participates in the Out of the Darkness Community Walk, a 3-5 mile walk taking place 10 a.m.-12 p.m. Saturday, Dec. 7 at Kiwanis Park in Tempe, with the proceeds benefiting the American Foundation for Suicide Prevention (AFSP).

It’s just one of the many efforts the foundation has made to raise awareness about bullying and depression among teenagers. The foundation has a page on Facebook (Andy Hull’s Sunshine Foundation) to help reach that younger generation. Rather than focusing on the negative, the message of the foundation is to tell every child, “You Matter.”

The foundation has held several fundraisers, and has had T-shirts and wristbands made with the “You Matter” message. LeAnn also has spoken to students, teachers and administrators in the Deer Valley Unified School District and the Washington Elementary School District, spreading the “You Matter” message and heightening the awareness of the alarming numbers of suicides among youth.

“I want to show these kids that if I can survive something so horrible, that they, too, can survive the many difficult and confusing moments during their teenage years,” LeAnn says. “I want to give them hope for their future. I want them to know that they matter.”

To make a pledge on behalf of LeAnn and the Any Hull Foundation for the “Out of Darkness” walk, go to: http://afsp.donordrive.com, and under “Find a Participant or Team,” type in LeAnn Hull’s name. Walk donations are accepted until Dec. 31; their goal is to raise $3,000 in pledges.

If you want to participate in the walk yourself, the registration deadline is noon on Friday, Dec. 6. Register online at http://afsp.donordrive.com or call Steve Schiro at 480-212-2489.