By Colleen Sparks
When Olivera Dedic’s husband, Enes, became sick after returning from a trip to Bosnia for his mother’s funeral, the idea that he might have the Coronavirus did not cross her mind.

Dedic, 53, said Enes, 55, had a fever and a cough and she believed he had become ill with the flu. A physician told him to take Tylenol but then things took a turn for the worse.

“He woke me up and told me he could not breathe,” Dedic said. 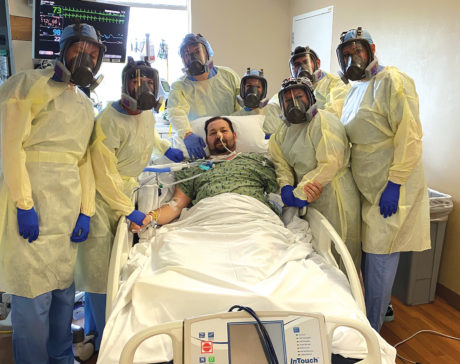 Enes Dedic, 55, was the first Coronavirus patient in Arizona to survive after receiving the extracorporeal membrane oxygenation (ECMO) therapy. He was treated at HonorHealth John C. Lincoln Medical Center, as seen here with the medical team that saved him (submitted photo).

She took Enes to HonorHealth Deer Valley Medical Center, but after two days his health quickly deteriorated. He was transferred to HonorHealth John C. Lincoln Medical Center at 250 E. Dunlap Ave., for increased mechanical ventilation. Tests revealed Enes had COVID-19 and he was placed on extracorporeal membrane oxygenation (ECMO) therapy.

Enes became the first COVID-19 patient in Arizona to survive after receiving the ECMO treatment, through which a device removes blood from a patient’s body, pumps oxygen into the blood and then pumps it back into the body to relieve strain on damaged lungs and hearts.

Dedic is grateful to the medical team at HonorHealth John C. Lincoln Medical Center for saving her husband’s life and allowing her to see him through Facetime in the hospital as visitors were not allowed in order to protect everyone. Enes spent 10 days in a medically-induced coma, and then on the eleventh day he awakened and became responsive. He has been communicating with his family members through Facetime and as of press time was expected to return home soon.

“I was so happy to see his face,” Dedic said. “I told him that we love him, that he has to be strong. He’s very tough. Now it’s very emotional that he is a survivor. We just love each other, respect each other. The love between us, I’m sure saved him.”

She added she can’t say “how much I’m thankful” to the doctors and nurses that cared for her husband. Dedic and Enes will have been married 32 years in December. Enes is an electrician and Olivera works as a store manager for Sally Beauty Supply and the couple has a 30-year-old son who lives in California.

Dr. Robert Riley, chief of cardiothoracic surgery at HonorHealth, member of HonorHealth’s Cardiovascular Center of Excellence and co-director of the ECMO program at HonorHealth John C. Lincoln Medical Center, was thrilled to be on the team that saved Enes.

“That’s the most encouraging thing that we have a good result,” Riley said. “The survival of our patient required a tremendous team effort including physicians, respiratory therapists, nurses and even housekeeping to address unique ways in which to care for, monitor and sanitize our unit for the best possible care. I can’t emphasize enough that this was truly an out-of-the-box approach to care.”

Dr. Anselmo Garcia, a pulmonologist and critical care physician, as well as an independent member of the HonorHealth medical staff, said Enes was put on his stomach, called prone positioning, to try to help him breathe. His symptoms and recent international travel caused the medical team to suspect he had acquired the Coronavirus, Garcia said.

“We are now being contacted by other prestigious medical centers across the United States, seeking advice on what we have done,” he said. “Right now, Dr. Riley and I are working with the Maricopa County Department of Public Health and the Arizona Department of Health Services to set up statewide preparedness with the list of processes and protocols that have been developed.”

“Its really gratifying to know someone that was facing certain death is able to return to his family,” Ovil said.

Celina Acevedo-Adams, a nurse and ECMO coordinator at HonorHealth John C. Lincoln Medical Center, said she and others talked to Enes to encourage him during his treatment.

“We’re always optimistic that they’ll be okay,” Acevedo-Adams said. “We always talk to them. I said, ‘Just keep fighting.’ We did it all together. This is what I love to do.”

“He’s my big brother, my hero,” Softic of Scottsdale said. “I am flying in the sky, very happy. He’s the best brother anyone could wish for. He’s my protector. I am so thankful to the doctors, nurses, God.”

Dedic said she is grateful to friends and family members that called, brought her food and otherwise supported her. It was scary waiting at home for updates on her husband’s condition.

Enes was one of the first COVID-19 ECMO survivors in the United States documented via the national registry Extracorporeal Life Support Organization (ELSO), an international non-profit consortium of healthcare institutions. This group is committed to the development and evaluation of novel therapies for treating failing organ systems.