By Colleen Sparks
Dreamy Draw Recreation Area will be closed for about a year starting in 2021 because a water pipeline is being installed underground and major improvements are being made to the park itself. 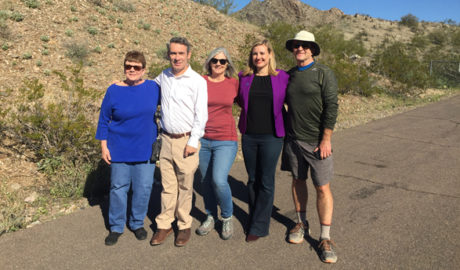 The 66-inch-diameter pipeline that is expected to begin at the 24th Street water treatment plant around 24th Street and Maryland Avenue had drawn concerns from residents in three neighborhoods and with the Phoenix Mountains Preservation Council, Inc. over the last several months. The pipeline, which is needed to address drought concerns on the Colorado River, will offer alternative water supplies to north Phoenix as a water shortage looms, city officials have said.

Many of the residents had said they were worried about increased traffic, safety risks and potential environmental damage that the two pipelines would bring to the Preserves and the neighborhoods. Later they said they were happy the city listened to their concerns and changed the planned route for the 66-inch-diameter pipeline to move it closer to the 51 freeway in one area and farther from their homes. The City Council in January approved an intergovernmental agreement with the Arizona Department of Transportation for permanent use of a right-of-way next to the 51 freeway as a different route for the 66-inch-diameter pipeline.

Libby Goff, board secretary for the Phoenix Mountains Preservation Council, is glad the 66-inch-diameter pipeline route was changed to be closer to the 51 freeway.

“This is clearly a win and it’s much better than it was before,” Goff said. “The pipeline will not be going through the most pristine area and it will be a lot less disruption for the neighborhood and the school (Madison Heights Elementary School).”

She said she and the others on the Phoenix Mountains Preservation Council are still concerned about the plans to put the 66-inch-diameter pipeline going “far east into the preserve” to avoid the Dreamy Draw Dam.

“Any time you disturb the desert, it just doesn’t recover well,” Goff said. “In most cases it’s never the same as before it was disturbed. We’re going to continue to watch this and work with the city on this.”

The pipeline is expected to go from the 24th Street water treatment plant, north along 21st Street, then west on Myrtle Avenue and then go north near 20th Street, ending near 32nd Street and Shea Boulevard.

Dreamy Draw Recreation Area will be shut down from February 2021 to the spring of 2022 while the 66-inch-diameter pipeline is installed and other park upgrades are made. The layout of the parking lot at Dreamy Draw will be changed to create better flow and access, the old restroom will be replaced and a new bicycle lane will be built in the park. Hikers will still be able to access the Phoenix Mountains Preserve from other areas during the construction period.

The city also is planning to rehabilitate and/or replace a 48-inch-diameter water main that offers water to the north part of the system, starting from the water treatment plant at 24th Street west to Maryland Avenue, to 20th Street and north to Orangewood Avenue, where it will cross the 51 freeway and link to the existing pipeline. That pipeline has come to the “end of its useful life,” said Darlene Helm, deputy Water Services director for the city of Phoenix.

To learn more about the planned water pipelines, visit phoenix.gov/waterservices/droughtpipeline.