By Colleen Sparks
Jesse Ary grew up in southern Louisiana raised by parents who were sharecroppers during the time Jim Crow laws were in effect but racism and other obstacles never held him back. 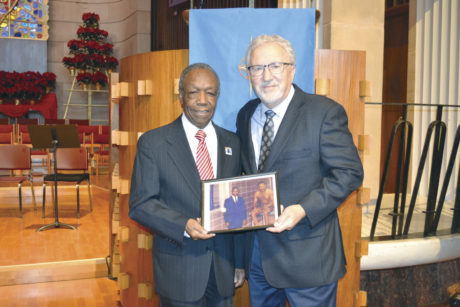 The North Central Phoenix resident as a young man became the first African American director of a YMCA in the Valley and he served on the Arizona State Board of Education for several years. Ary, who will turn 80 years old this month, will be honored with the Dr. Martin Luther King, Jr., Calvin C. Goode “Lifetime Achievement Award” at the 34th Annual Dr. Martin Luther King, Jr. Awards & Scholarship Breakfast from 7 to 9 a.m. on Thursday, Jan. 16 at Sheraton Downtown Phoenix at 340 N. 3rd St. The Arizona Dr. Martin Luther King, Jr. Celebration Committee is hosting the event, where four other people will be recognized with different awards.

Ary, who volunteers on the administrative council of the First United Methodist Church of Phoenix on North Central Avenue, said he is honored to be selected for the award ahead of Martin Luther King, Jr. Day, which is on Jan. 20.

“That is really a tremendous honor,” Ary said. “I always stayed on the positive side of life. If you put away all of those idiosyncrasies about race and ethnicity, we’re all human beings trying to get through life and do the right thing.”

Growing up with four brothers and two sisters (who are now deceased), Ary’s father picked cotton and pulled mules while his mother babysat other families’ children. Ary received a scholarship to attend a YMCA training college in the Chicago, Illinois area called George Williams College. After earning his bachelor’s degree, he took a job as the youth program director at a YMCA in Cleveland, Ohio. Ary later was promoted to become the executive director of the Glenville YMCA, where he had a chance to meet King in the 1960s and capture a picture with him by the Y’s pool.

“He was very, very nice,” he said. “When his widow came to Phoenix after I moved out here she gave a speech. I gave her a copy of that photo.”

Ary said his first wife, who has since died, had health issues that brought them to Phoenix 50 years ago. At 29 years old in 1969 he became the director of the Northeast branch of the YMCA on East Clarendon Avenue, which has since closed.  While he likes Phoenix and found it progressive, racism was more common then. Someone carved “KKK” on a palm tree near his family’s house in one incident and another time a boy playing with his son assumed his wife was a housekeeper, but Ary said he and his family were “not going to be intimidated.”

After about five and a half years at the Northeast Y, he was selected as executive director at a downtown Phoenix YMCA. His oldest son, Brentley, was the first African American student to be enrolled in one of the Madison School District’s schools.

Ary later went to work for Carolyn Warner, who was then the state superintendent of education. Gov. Janet Napolitano appointed him to the Arizona Board of Education, on which he served for two terms.

Ary, now a grandfather and remarried, has volunteered for many organizations, including the board for Family Service Agency. He volunteers on the administrative council for the First United Methodist Church of Phoenix at 5510 N. Central Ave., helping make decisions tied to the congregation’s goals and mission. Denny Silk, senior pastor at First United Methodist Church, praised Ary.

“He’s got a very mature and caring spirit,” Silk said. “People recognize that and they trust his input.”

Ary also was recently appointed to the national United Methodist Higher Education Foundation board of trustees.

Ron Williams, chairman of the AZ MLK Celebration Committee Events & Activities, said Ary is “one of the most respected people in Phoenix” and is “very personable, just the ultimate professional.”

To learn more about the 34th Annual Dr. Martin Luther King, Jr. Awards & Scholarship Breakfast and other events in the state, visit azmlk.org.