A taste of Ireland is on tap at Rosie McCaffrey’s

By Marjorie Rice
It’s Wednesday afternoon at Rosie McCaffrey’s Irish Pub and owner Seamus McCaffrey and a few pals are cheering on their beloved Celtics soccer team. Clad in the team’s striped green and white jerseys, they toast a goal with Harp Irish ale, on tap at the spacious bar.

After the match, McCaffrey chatted with customers, welcomed newcomers and shared a laugh with familiar faces. 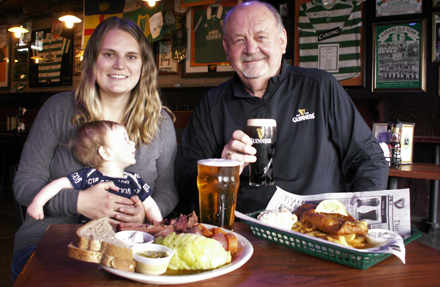 Kathleen McCaffrey-Flick with her son, Brady and father, Seamus McCaffrey, enjoy corned beef and cabbage and fish and chips at Rosie McCaffrey’s Irish Pub. Seamus owns the restaurant and Kathleen is the manager (photo by Marjorie Rice).

A native of Belfast, Northern Ireland, McCaffrey came to Arizona in 1981. His background wasn’t in operating pubs, but necessity called.

“When I first got to Phoenix, it was summer, and I asked where I could find an Irish pub,” he said. Someone mentioned a downtown spot and McCaffrey made a beeline for the bar.

For McCaffrey, his only recourse was to open the Dubliner in 1984. With it, he brought something new to the state: Guinness, the silky dark ale that so symbolizes Ireland to Americans.

“We were the first in the state to pour Guinness on tap,” he said. “I had to fight hard for it. The distributor said there was no market here for it.”

His daughter Kathleen McCaffrey-Flick, a former teacher, joined Seamus in running the pub three years ago.

“This has always been my life,” McCaffrey-Flick said. “I did my homework at the bar and I worked in the pubs as a server in college. An Irish pub has a family feel to it more than other bars. It’s a welcoming environment.”

Her son, Brady Seamus Flick, is starting on the same road. At four months old, he’s a frequent visitor, coming to work with his mom.

The atmosphere is Irish, and so are the drinks – Harps and Guinness predominant, with Smithwick’s and Kilkenny ales, Magners Irish Cider and Irish whiskeys – and a healthy list of Arizona and international labels.

The food menu has a similar balance of Irish and American. Fish and chips, Guinness steak and mushroom pie, shepherd’s pie, bangers and mash, and Irish potato boxty (shepherd’s pie, corned beef and cabbage or Guinness prime rib served between two potato pancakes) lead the list of Irish standards. The pies are made with beef rather than lamb to cater to American tastes, Seamus said.

Seamus conceded that corned beef and cabbage isn’t really Irish, but Americans expect it so that’s what he serves.

While the menu is mixed, the atmosphere at Rosie’s is pure Irish, from the rollicking songs piped through the sound system to the dark, cozy atmosphere. There are live bands and karaoke several nights each week, and as the Guinness pours, the singing swells.

There’s an entire wall devoted to those beloved Celtics. The rest are festooned with crockery, figurines, maps, photos, mottoes, flags, posters of Irish Revolutionary War heroes – so much that there’s scarcely a bare square inch.

On St. Patrick’s Day, Tuesday, March 17, the pub will rope off the parking lot for its 28th Annual St. Paddy’s Day Street Fair beginning at 8 a.m. (that may shift to 6 a.m. so check the website for times), serving a limited food menu and plenty of drinks, including Irish coffee. An outdoor celebration, including three bands, goes on until 2 a.m.