By Colleen Sparks
A North Central Phoenix long-time television and radio host, reporter and anchor who is battling lung cancer will take her place in the spotlight at an upcoming performance where she and other survivors will share their stories. 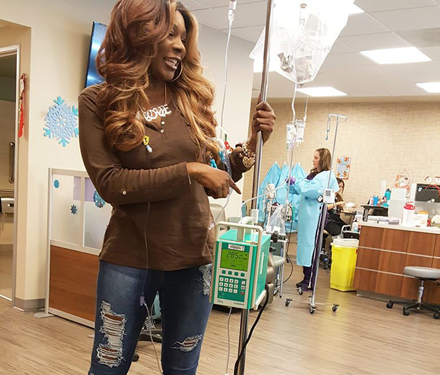 Danielle Williams, a local TV and radio journalist who is fighting stage four lung cancer, will share her story at “S.T.A.R.S.: Survivors Tell A Real Story” on Sunday, March 22 in Scottsdale (submitted photo).

Danielle Williams is battling stage four lung cancer that has spread to other parts of her body. She and eight other women who have survived cancer will share their stories of overcoming challenges and finding purpose at the “S.T.A.R.S.: Survivors Tell A Real Story” curated storytelling performance starting at 2 p.m. on Sunday, March 22, at Scottsdale Center for the Performing Arts at 7380 E. Second St.

Still undergoing treatment, Williams, 51, has always been active, frequently hiking and working out and she has never smoked. She was having back pain and found out the cancer had spread to her pelvis, lower back and shoulder. Williams, who was diagnosed with lung cancer in November of 2018, received radiation and had surgery on her lower spine. Now she is going through chemotherapy and has been on disability but maintains a positive attitude and as active a lifestyle as possible.

“This is just how I live my life,” Williams said. “I’ve trained my brain and myself to be my own cheerleader. You’re the only one in charge of your life.”

She wears heels and makeup to chemotherapy and is back in the gym working out, as well as hiking at Camelback Mountain.

A2ndAct, a non-profit organization, is producing the Scottsdale show. Olivia Fierro, anchor of “Good Morning Arizona” on 3TV, will serve as emcee for the event. A2ndAct supports and celebrates women who have survived all types of cancer who are using their newly discovered gifts of life and experience to give back.

Williams served as a judge on a panel that selected the other eight women for the show. She also plans to visit Washington, D.C., later this month as an invitee of the American Lung Association for Advocacy Day to advocate on Capitol Hill for funding for education, research and treatment for non-smokers who have lung cancer.

Tickets for “S.T.A.R.S.: Survivors Tell A Real Story” are $22 per person, not including a surcharge, and may be purchased at 480-499-8587 or at scottsdaleperformingarts.org.