By Colleen Sparks
The story of a local man whose dream of enlisting in the Marines was shattered when he discovered he was not a U.S. citizen will come to the stage in an unusual new musical this month. 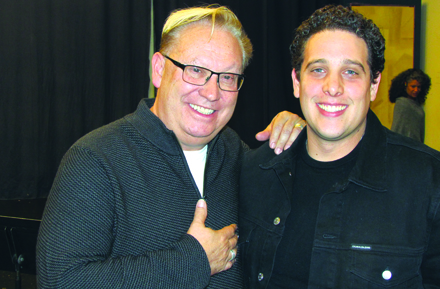 Antonio Valdovinos de la Mora, a Camelback High School graduate and owner of a political firm, is the subject of “Americano!” which opens Jan. 29 and will run through Feb. 23 at The Phoenix Theatre at 1825 N. Central Ave. Born in Colima, Mexico, he moved with his parents to California when he was 2 years old before moving to Phoenix when he was 4.

While Valdovinos de la Mora said he was not strong academically when he was at Camelback High, he loved taking photos and worked on the school newspaper, as well as weightlifting. His goal was to become a combat photographer in the U.S. Marines.

When he was 17 years old, Valdovinos de la Mora went to a Marine Corps recruiting station in Phoenix and found out he was an undocumented immigrant.

“I wasn’t aware of it growing up,” he said. “To me, I felt completely hopeless to what I was going to be doing with my life. I didn’t have the grades for a scholarship. My father couldn’t afford us going to college.”

Valdovinos ended up taking classes at Gateway Community College but a tuition hike forced him to stop his studies. Then he began volunteering for the political campaign for now Congressman Ruben Gallego. While gathering signatures to help Gallego get elected, he met other students who were also part of what’s called the “Dreamers,” undocumented immigrants brought to the United States as children. Valdovinos later volunteered for the Democratic Party and helped get now Phoenix Mayor Kate Gallego elected. In 2015 he started his political firm.

Jason Rose, a local public relations executive, wanted to produce a show about immigration, The plans came together when he ran into Michael Barnard, producing artistic director of Phoenix Theatre Company, at a wedding. The two of them hired Jonathan Rosenberg of San Diego to help write the script for the musical and the musical is the result of the collaboration between The Phoenix Theatre Company and Quixote Productions, of which Rose is producer and founder. Tony Award-winning producer Ken Davenport is the executive producer of “Americano!” Carrie Rodriguez, a singer-songwriter of Austin, Texas, composed the music for the musical and Sergio Mendoza, a native of Nogales, has arranged the music. Barnard is the co-author of the musical and the director.

Barnard said he and Rose were just “blown away” by Valdovinos’ story.

“We wanted to tell a human story,” Barnard said. “He’s so devoted to this country. We wanted to put a positive spotlight on the ‘Dreamer.’”

Valdovinos is thrilled to see part of his life story be performed in the musical.

“You can’t imagine listening to songs portraying your life,” he said. “