By Teri Carnicelli
Christmas came early and in a big way for Sunnyslope Elementary fourth-grade teacher Patricia Wharton, who was surprised with a donated vehicle during a special event held Nov. 30 on the school’s campus. 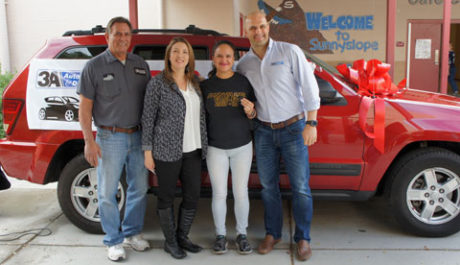 Patricia Wharton (second from right), a fourth-grade teacher at Sunnyslope Elementary, is surprised with a donation of a 2006 Jeep Grand Cherokee from the team at 3A Automotive & Diesel, including, from left: Jim Alauria, founder of 3A, and Nadine and Jimmy Alauria, owners of 3A Automotive (photo by Teri Carnicelli).

The 2006 Jeep Grand Cherokee was donated by the owners of 3A Automotive at 1539 W. Hatcher Road as part of its “Turbo Boost Car Giveaway.” 3A started taking nominations in October for those who were deserving of the donation, and two of Wharton’s colleagues nominated her.

Wharton has been at the school for two years but has been part of the Washington Elementary School District for much longer. She works as the school’s outreach specialist for its After School programs, and while she receives a small stipend for that work, it’s a drop in the bucket for the amount of personal time she puts in, says Sunnyslope Elementary Principal Chance Whiteman. “She contributes so much of her time, she’s really passionate about helping these kids be successful.”

Wharton’s husband is a teacher at a Phoenix charter school, and he drops her off early in the morning before heading to work. Wharton had sometimes needed to borrow a co-worker’s car to go to a doctor’s appointment or make a trip to Costco to pick up snacks for the After School program.

Wharton was completely shocked by the unexpected donation, which was accompanied by cheers and applause from her students, co-workers, team members from 3A Automotive, and firefighters from the nearby Station 7 on Hatcher Road. She also received a year’s worth of free oil changes at 3A Automotive.

Wharton expressed her gratitude to her co-workers for their patience and their help, and was overwhelmed with the donation of the SUV. Her students joined her in checking out the new-to-her vehicle, which had been fixed up by 3A Automotive—to the tune of several thousand dollars—and completely detailed inside and out.

“We’ve really become more actively involved in our community the last couple of years, and wanted to do something to give back,” explained Jimmy Alauria, owner of 3A Automotive, which was started in 1975 by his parents Jim and Earlene.

“We had close to 40 nominations, and had it narrowed down to about three. But when we started talking to some of the nominators, and learned more about Patricia, we realized how truly amazing she was and knew it had to be her. It’s not just her commitment to her students and the school, it’s her passion for life and learning, and her spirit—she wasn’t letting something like not having a car stop her from giving 100 percent.”

Wharton is in the process of earning a master’s degree in education from Northern Arizona University, and is applying for National Board Certification, an advanced teaching credential that is the highest level of distinction a classroom teacher can achieve.