The GUHSD Governing Board hosted the dinner on Tuesday, July 16 at Thunderbird High School. The gathering provided the opportunity for the Governing Board to meet each one of the new teachers and learn more about their education, experience and achievements. The teachers were also able to socialize and build connections with their new co-workers. 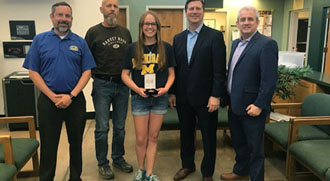 Of the 63 new teachers hired, 22 are first-year teachers, 16 are GUHSD graduates and nine have completed their student teaching within the district. In addition, three of the educators started their roles within GUHSD as instructional assistants and became teachers through the district’s support staff professional growth program.

Saxe enrolled in the Congressional Award Program during the fall of her sophomore year and has participated in the program for the past two years. In order to receive this award, she completed 100 hours of community service, 50 hours of personal development and physical fitness and an overnight excursion.

The Congressional Award Program is the only non-partisan, voluntary, nonprofit program sponsored by both houses of the United States Congress.

Two teachers in the Madison Elementary School District have turned to the public for support to fund their classroom projects, via the crowdsourcing website, DonorsChoose.org.

Heidi Rodriguez, a bilingual speech language pathologist at Madison Park Middle School, wants to help boost the benefits her students are getting when they practice yoga and mindfulness strategies. Rodriguez works with special education students, primarily those who have diagnoses of learning disability, mild mental retardation, autism and language disorders.

Her middle school students have been learning yoga and mindfulness methods, and Rodriguez has already seen notable results after only a few sessions.

She is seeking to raise $246 to buy several materials including a clock for timing activities, and a bell to gently draw students’ attention, a lamp to light the classroom without having to use overhead fluorescent lights, a Hoberman Sphere to offer youths a visual during breathing exercises, and battery-powered tealights for focus when students do mindfulness activities. Her fundraiser expires on Aug. 7.

Rachel Jasinski of Madison Simis Elementary School is hoping to drum up support for chairs designed to help her kindergartners explore and learn.

She wants to buy seven chairs her classroom, six of which are special “Wobble Chairs” by Studico. Her total fundraising goal is $493, and it expires on Sept. 17.

Jasinski says that the new furniture will provide the students with an option to a hard chair, which can help alleviate attention problems and behavior issues. She said the chairs will help students learn “education can be fun and interactive rather than sitting in their desks all day.”

Visit www.DonorsChoose.org and search for Madison Simis Elementary in Phoenix. For more information, contact her directly at rjasinski@madisoned.org.

Arizona Diamondbacks’ third baseman Eduardo Escobar paid a visit to North High School on May 10 and talked to baseball and softball players at the school’s baseball field.

The Venezuelan native spoke to the students in Spanish and English about his success, from playing with a paper ball in the streets of his hometown, to being discovered by a White Sox scout at age 16. Escobar told the students to cherish everything in life, especially “your parents, teachers, coaches, because they will guide you to what you want to achieve, no matter where you come from. Don’t let anyone tell you that you can’t. Never give up on your dreams. But there is no magic bullet to success.  Stay focused, when adversity hits and you are tested, never lose faith. Focus, faith and hard work will get you through.”

Escobar brought souvenir caps, signed autographs, and invited the students down to the Chase Field diamond to take in the D-backs batting practice the next day. They also were recognized during pre-game ceremonies.

North High, like several PUHSD schools, received $7,000 in equipment from the Diamondbacks Foundation and its Chase (Bank) Your Dreams program, split evenly for the baseball and softball programs. The Mustangs received bats, balls, catching gear, batting helmets, and a pitching platform for batting practice pitching.

Metro Tech High School was selected as the AIA 5A Conference Sportsmanship Program of the Year for the 2018-19 school year.

“Metro Tech is relatively new to the AIA and has had its challenges competing with traditionally strong athletic programs in our district as well as with programs outside of Phoenix Union,” said PUHSD Athletic Director Zack Muñoz, who wrote the nomination letter for the Knights. “However, whether in victory or defeat, their students and coaches have consistently demonstrated outstanding character and sportsmanship in competitions. Their student-athletes and coaches show class and represent their community well no matter what the outcome.”

Metro Tech was honored at the AIA Champions Luncheon at State Farm Stadium on May 17.

Geston named a member of Chiefs for Change

Phoenix Union High School District Superintendent Dr. Chad E. Gestson earlier this year was selected to be a member of the Chiefs for Change, a nonprofit, bipartisan organization based in Washington, D.C. As a Chiefs for Change member, Gestson becomes part of a group of influential education leaders who advocate for public education reform at federal, state and local levels.

The organization’s vision is for all students, irrespective of geography or economic means, to have regular or fair access to high-achieving schools, fully prepared and supported teachers, challenging curriculum and affordable pathways to college and meaningful careers.

Gestson has served as superintendent of the Phoenix Union High School District since the fall of 2015. Under his leadership, Phoenix Union has grown to 21 schools, including the launch of five new schools, from a Gifted and Talented Academy to an online school to the Phoenix Coding Academy.

When school starts Aug. 5, WESD schools in the area will have new administrative leaders.

At Orangewood School, Heather Vasquez and Emily Paterson will be the new principal and assistant principal, respectively.

Vasquez started her career in WESD as a teacher in 2001 at Mountain View. She later became the program coach at Richard E. Miller. She has been the principal at Tumbleweed Elementary for two years, leading the school to a letter grade of A. She is a Rodel Teacher of the Year recipient and a 2015 WESD Lamp of Learning Award honoree.

Paterson has been teaching in WESD since 2009. She has taught special needs students at Ironwood Elementary and Cholla Middle School and she was most recently the Student Service specialist at Royal Palm Middle School. She is a mentor teacher and a cadre leader for the WESD’s teacher induction program, BEGIN.

Joining the administrative team as an assistant principal at Mountain View School is Emily Ellis-Hill. Ellis-Hill came to WESD from Cave Creek Unified in 2018 to serve as the instructional coach at Washington Elementary. She previously taught third grade Mandarin immersion classes and was a math coach.

The Phoenix Christian STEM program made its mark again in state and national competitions this past school year. In its third year in the statewide MESA (Mathematics, Engineering, & Science Achievement) competition, Phoenix Christian placed first overall in high school and fourth overall in middle school out of 15 high schools and 42 middle schools. Last year, PC placed first overall in both categories.

The MESA program is designed to increase access to science, technology, engineering, and mathematics (STEM) pathways and encourage college readiness for low-income, minority, or first-generation college-bound students in grades 6-12.

This created confidence later at the spring National Robotics Challenge in Marion, Ohio. With 42 high schools from 13 different states competing at the longest-running robotics competition in the world, Phoenix Christian placed 7th overall in the Robo Hockey competition. This success came from hard work and dedication in spite of the fact that none of the PC students had ever built a robot before this year.

This video, made by one of Phoenix Christian’s international students, offers a behind-the-scenes look at the journey to a MESA state championship, check out this video: https://bit.ly/2LIAgrz.