Zylstra, others honored by Governing Board
The GUHSD Governing Board presented Achievement Above All awards to recipients from Thunderbird High School at its meeting on April 17. Every school year, one teacher, student, student group, support staff member and volunteer are honored for outstanding achievement and ongoing commitment to Thunderbird and GUHSD.

On top of her busy schedule, Zylstra finds time to volunteer at a cat shelter and even tutors violin at her prior elementary school, Lookout Mountain. She plans to attend Harvard University in the fall where she will study molecular and cellular biology.

This school year’s other Achievement Above All recipients were special education teacher Mike Sidebottom, the NJROTC, horticulturist Jesus Ruiz, and volunteers Arvid and Natalie Veidmark. During their recognition, the recipients were presented with an award for their achievement and ongoing commitment to Thunderbird and GUHSD.

The Medallion Scholarship is based on leadership, scholarship and service. Awardees receive four-year, renewable scholarships of $3,600 annually, provided they participate in a mentorship program, contribute volunteer hours, and maintain a satisfactory grade-point average.

WHS future educators head to national conference
For the fifth year in a row, Washington High’s Educators Rising was named a Gold level chapter at the State Leadership Conference, held March 4-6 in Tucson. WHS had the highest number of state champions and 11 students qualified for the National Conference competition, which will take place June 22-25 in Dallas.

She then competed in the discus. On her last attempt, Salas threw a mark of 119’ 2”, a distance that earned her the Gold Medal and a new Thunderbird High School discus record, breaking the score that has stood since 1982. 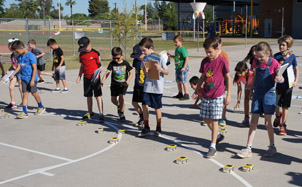 Second grade students at Madison Simis race solar cars as part of a STEM project developed by teacher Bonnie McCarthy, thanks to a grant from APS and the Phoenix Suns Charities (photo by Teri Carnicelli).

McCarthy was one of 28 teachers across Arizona who received a mini grant this school year from APS and the Phoenix Suns. The grant program, now its 13th year, helps Arizona teachers bring innovative hands-on science, technology, engineering and math (STEM) learning to students throughout the state.

The students assembled the cars while learning about math and science, and were eager to test them out on April 24. They first came up with hypotheses about how the cars would perform in full sun, partial sun, and shade, and then recorded the results on a graph.

During the solar car project, students also explored how solar energy could be used to develop technological solutions to current transportation challenges.

The 30 solar cars that McCarthy was able to use with her $750 grant will be shared with other second grade classrooms at Simis next school year, so that each has a turn at the weeklong project and lesson plan.

Longview Elementary receives A+ rating
The Arizona Educational Foundation’s A+ Schools of Excellence program recently named Longview Elementary as one of its 52 designees for the 2018-19 academic year. It was the only school in the Central Phoenix area to receive this designation, and earned the school at $500 award and a banner to hang. The award is valid for three and a half years.
A+ schools at a minimum must have achieved an A or B in student achievement labels and must have established leadership in a principal present at the school for three or more years.

Longview celebrated its accomplishment with its school community and families prior to the end of the school year.

Proving their worth as future biz leaders
Twelve Central High Business students attended the Future Business Leaders of America (FBLA) State Conference in Tucson in April. Nitsaye Tovar Medrano and Robsan Jigayo qualified for the Nationals, June 27-July 3 in San Antonio, Texas. Medrano placed third overall with her Business Plan. She had a written report and presentation to complete and had been working on her project since October.

Jigayo will represent Arizona in the Global Business event as the number three competitor. She and her partner, Lizbeth Tapia Maritnez, placed sixth in that category at the state event.

The troupe presented a dance choreographed by sophomore Melina Ruano and dedicated to the Zapatista Movement. The Mechistas also had to opportunity to meet historical figures who participated as teenagers in the 1968 East Los Angeles High School “Blowouts” during the Chicano Civil Rights Movement.

Pitching their own business ideas
Eight students from Camelback’s Entrepreneurship program, one student from North and one from Metro Tech pitched to investors at the Young Entrepreneurship Academy’s Pitch Night, held at Phoenix College. These students worked all school year learning how to find solutions to problems, start their business, write a business plan and create a pitch deck. In total over $7,500 was awarded.

The overall winner, Jesse De La Cruz from Camelback High, competed at the National Competition in New York in May for a chance to pitch on AB’’s television show, Shark Tank. His business idea was organic hair care products for teens, dubbed “The Hair Guy.” 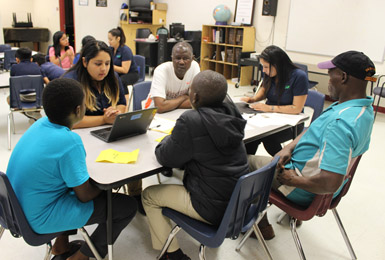 Employees of Cox Communications present families from the Washington Elementary School District with free, refurbished Cromebooks and also get them signed up for Cox’s Connect2Compete program, which gives qualifying families access to the Internet for just $9.95 a month (photo courtesy of Cox Communications).

Nearly 100 students from throughout the Washington Elementary School District and their family members were excited to receive free, refurbished Chromebook laptops on the night of May 13, courtesy of Cox Communications’ Sustainable Solutions team.

The 95 computers were distributed to pre-qualified students and their families at an event hosted at Sunnyslope School. Students who qualify for the National School Lunch Program, SNAP, TANF or live in public housing may be eligible for Cox’s Connect2Compete’s $9.95 per month Internet service. Those who were not already enrolled in the program were invited to sign up for the service during the event.

“We have seen studies that show that more than 80 percent of teachers in middle and high school assign homework that requires doing some kind of work online,” said Roxanne Wingate from Cox Communications. “This means students who do not have computers or the Internet at home have to go elsewhere, such as the library, multiple times a week just to get their work done. Cox is committed to helping close that digital divide for lower-income students.”

Touch A Truck fun at Midtown School
The Phoenix Police Department helicopter buzzed the Midtown Primary School campus as the kids yelled and waved, part of a fun and interactive “Touch A Truck” event held April 6.

The Midtown students, families, and neighbors were able to climb into a Swat Mobile Unit, police cruisers, a fire truck, a huge crane, bob cats, a boat, a bus, a Phoenix Water Tech Truck, and even a Bat Mobile.

Many friends, neighbors and businesses all pitched in to provide the kids with fascinating vehicles to explore. SH Engineering brought Big Bertha (a huge crane) all the way from Maricopa. Kevin, the Bomb Squad Dog, napped most of the morning.

In addition to the many vehicles the children were able to explore, there also was a bounce house to jump in, face painting, and other fun activities.

Ryan Watson has been named at the new principal at St. Francis Xavier Elementary School, replacing Kim Cavnar, who announced her sabbatical in January.

Watson inherits a school that sees spiritual formation as integrally connected to the academic, social, emotional, and physical development of the whole child.

“I am excited to continue to live out my passion for Catholic education at St. Francis Xavier,” Watson said. “My desire to serve as principal is deeply inspired by the school’s mission and words of St. Ignatius of Loyola, ‘Go Forth and Set the World on Fire’.”

For the past 11 years, Watson has served in a variety of administrative and leadership roles within the Diocese of Phoenix. Watson will officially take the reins as principal on June 1, 2019.

Phoenix Christian Preschool students and staff members had great fun preparing garden beds and planting seeds last fall. Just before the end of the school year, as the plentiful spring showers came and went, they were able to see the fruits of their labors.

The students learned about responsibility by taking care of the gardens together. Every Friday, they were able to enjoy the fruits and vegetables they had grown in salads, served alongside slices of pizza.

Also growing is the school itself. Already serving 2 and 3 year olds, the preschool will be adding a 1-year-olds classroom in the fall. For more information, contact Lori Miller at 602-265-7728 or LMiller@phoenixchristian.org.

“I want to thank every single player who contributed sweat, effort and skills to this successful season,” said Coach Dwayne Howell, who described the play as physical after one of his players was injured during the game. The team survived the semifinals earlier that day, defeating AMS Camelback 7-2 in order to advance to the championship. Two players scored a hat trick, and goalie Isai Ponciano was named top goalie.

“Coach Howell taught me how to throw myself to block goals and how to talk to my team mates,” said Ponciano, who began playing soccer at age 3 with his dad, who was at the game cheering with his two older brothers.

The championship is the second for the school this year and comes just six months after the high school won its first Boys’ State High School title.

Saul Guillen, a sophomore at Madison Highland Prep, has been accepted into the Joaquin Bustoz Math & Science Honors Program at Arizona State University.

Guillen will live on the Tempe campus this summer while enrolled in a university-level mathematics course, attending class six hours per day. Homework will be assigned daily, quizzes twice weekly, tests weekly and students will conduct research to present at a poster symposium. Full tuition, room and board, textbooks, and classroom expenses are provided.

The program is intended for motivated students who are interested in academic careers requiring mathematics, science, or engineering-based coursework.

Caroline Hyland, a senior at Xavier College Preparatory, was one of 20 Arizona high-school seniors named as a 2019 Flinn Scholar. She will receive a scholarship to her choice of Arizona’s three public universities valued at more than $120,000.

Hyland’s commitment to education led her to bring clean water to students in Haiti, build a sustainable school garden in Nicaragua, and teach algebra in Spanish to teenagers in Ecuador. She developed her voice and leadership skills through Mock Trial, while also fostering her passion for STEM, specifically biology and computer science.

Through the Diocese of Phoenix, Highland also received the Regina Caeli Award for Scholarship, the highest honor bestowed on a graduating senior.

The merit-based Flinn Scholarship is a full ride that covers the cost of tuition, fees, housing and meals and provides funding for at least two study-abroad experiences plus additional benefits.