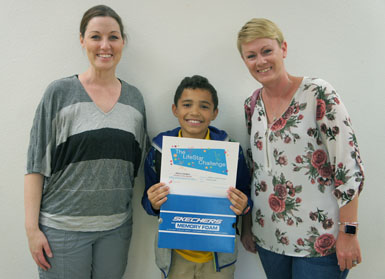 Atticus Sanders, center, is congratulated on his LifeStar Challenge Student of the Month award by, from left: teacher and program coordinator Maggie Sant, and Dawn Harris from Healthy LifeStars (photo by Teri Carnicelli).

HealthyLifestars, which operates the LifeStar Challenge before and after school program, selected 9-year-old Atticus Sanders from William T. Machan School as its February Student of the Month.

The LifeStars commit to living an active, healthy life now and in the future. A curriculum is provided to participating schools that includes classroom studies on setting personal health goals and eating the right foods in the right amounts, and weekly physical activities that are fun and can be duplicated at home.

Atticus was chosen for his commitment to the program, setting fitness goals and achieving them quickly. He received a free pair of shoes from program sponsor Sketchers and a certificate of achievement. 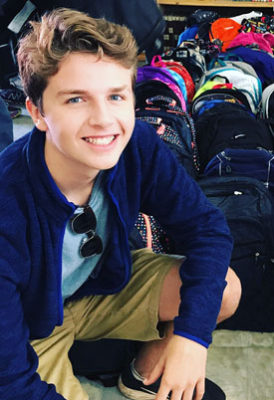 Nathan Simmons, 18, was named one of Arizona’s top-two youth volunteers of 2019 by The Prudential Spirit of Community Awards, a nationwide program honoring young people for outstanding acts of volunteerism. Simmons received $1,000, an engraved silver medallion and an all-expense-paid trip in early May to Washington, D.C., where he will join the top two honorees from each of the other states and the District of Columbia for four days of events. During the trip, 10 students will be named America’s top youth volunteers of 2019.

Nathan, a senior at Sunnyslope High School, and his younger brother, Seamus, a sophomore at Sunnyslope, are founding board members of nonprofit organization call the Re:Help Organization that has mobilized young people to collect thousands of unwanted school supplies (Re-Pack), toys (Re-Wrap) and shoes (Re-Tie) for kids in need in Arizona and five other countries.

While visiting a school in Africa in 2012, the brothers were struck by how little its students had in the way of tools to support their education. They were even more shocked after returning home and seeing how many decent school supplies were discarded by their classmates at the end of the school year. Seeing an opportunity, Nathan and his brother began recruiting young volunteers and schools to collect surplus school supplies for African kids, and also for homeless shelters in Arizona.

At the end of each school year, this “Re-Pack Project” delivers empty boxes to participating schools to encourage students to donate supplies that would otherwise be thrown away. Nathan and his fellow volunteers then gather, clean and sort the donations, package them in backpacks, and ship them off to local shelters and overseas schools. The Re-Pack initiative collected supplies through seven schools in three states last year, and is now partnering with schools and organizations in Arizona, Mexico, South Africa, Peru, Thailand and Fiji to distribute the donations.

In addition to school supplies, the organization has collected toys and shoes for thousands of children in need. “Everything I have discovered through this five-year journey has given me faith in the world, in people, and in their ability to come together and support each other,” Nathan said.

Vikings honored by GUHSD Governing Board 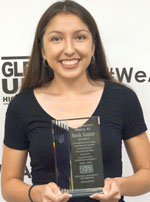 Achievement Above All recipients at Sunnyslope High School were recognized by the GUHSD Governing Board at a recent meeting. Every school year, one teacher, student, student group, support staff member and volunteer are selected to be honored for their outstanding accomplishments to the GUHSD community.

This school year’s recipients were P.E. teacher Sarah Schlesinger, senior student Sarah Kanner, the Unified Sports club, bookstore manager Nayla Olvey and volunteer Hillary Rusk. During their recognition, the recipients were presented with an award for their achievement and ongoing commitment to Sunnyslope and GUHSD.

To learn more about Sunnyslope High School’s Achievement Above All recipients, visit www.guhsdaz.org.

Applicants were rated based on artistic and technical merit in dance, leadership and academics. The top-scored dancers go to the National Dance Education Organization’s offices for the national adjudication, where they’ll be in the running for the national award. 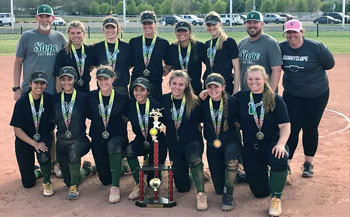 On top of that, freshman Angie Howard, senior Taylor Diaz, and freshman Maddie Udall made the All-Tournament team while sophomore Erin Ross won the Home Run Derby competition. This marks the first time in school history that Sunnyslope softball has won a tournament championship. 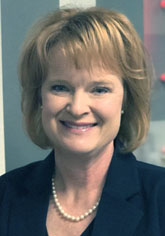 Webb has served at both public and private schools, and is completing her sixth year as an assistant principal, the fourth of which has been at Rose Lane. Simis will be the fourth Madison school in which she has worked. She has also served in Madison as a community member, parent and teacher.

Madison Heights Elementary fourth-grade student Gavin Hoskins and Madison No. 1 eighth-grade student Marcus Giorza represented their district during the Arizona GeoBee, held March 29 at The University of Arizona. The winner received $1,000 and a trip to Washington, D.C., for the National Championship.

Both students are part of the Rigorous, Enriched, Accelerated and Curriculum for Highly Gifted (REACH) Program at their schools. The program provides highly gifted students the opportunity to function at an academic level that is commensurate with their abilities, while having the opportunity to interact socially with students who have similar interests and academic needs.

The week prior to the geography bee, Marcus also competed in the Arizona State Spelling Bee, which he won in 2018. In this year’s spelling bee competition, he captured third place.

Last year, Osborn participated in the “Farm to Summer Challenge,” a week of celebration of Arizona’s farmers, ranchers, dairymen and gardeners, through experience and education. Osborn’s participation was primarily through school garden preparation for fall gardens, Garden to Café programming as a component of Summer Food Service Programs, and nutrition-related activities.

Students from the Metro Tech Educators Rising Club participated in the Educators Rising Spring Leadership Conference in Tucson March 4-6. Cindy Yahuaca placed first in the state demonstrating her knowledge and passion for Non-Core Subject Teaching Careers, and Gisselle Loredo and Noemi Diaz were fourth in Ethical Dilemma Solution, which focused on students who struggle with behavioral issues. the three qualified to move on to Nationals in Dallas this summer.

Metro’s Chapter earned a Silver Chapter Award in recognition of its participation in events and projects along with members’ hard work preparing for their futures as educators.

Fabien Malbet, the deputy mayor of Grenoble, France, visited Central High School on April 5. Grenoble is a Sister City to Phoenix, and Central partners with a sister school there, Lycee Andre Argouges.

Camelback students learn about the Holocaust

Camelback High sophomore English students recently made a real-world connection to The Holocaust. While reading “The Book Thief” by Markus Zusak, set in 1939 Nazi Germany, the students created a Wall of Remembrance in one of the school’s hallways. Each student researched and identified a victim of the Holocaust, and commemorated that person with a poster. Some 400 names, faces and stories now tile the wall.

The story came to life on March 25, when 94-year old Oskar Knoblach, a Holocaust survivor, spoke to 200 students at the school. He was born in Germany and fled with his family to Krakow, Poland, fearing Hitler’s rise to power. He ended up as a “displaced person,” back in Germany in 1945. He received a sponsorship from a family in Canada and began a new life.

His son went to Camelback many years ago. After his presentation to the students, Knoblach visited the Wall of Remembrance with some students.

The students’ artworks went to Boston for display for the National Art Education Association’s conference.

Photography students Sheradon Klain, Savannah Douglas and Lia Wells had photographs displayed in the Heard Museum Guild’s Student Art Show and Sale from March 30-April 1. Students competed in the photography division, and had their work displayed in the museum’s Monte Vista room.

Once each year, WESD celebrates the unique, exemplary contributions of special members of the district’s family by honoring them with the Lamp of Learning Award. This award allows the district the opportunity to thank community and staff members for supporting the education of its students.

Among the honorees are teachers, staff members and volunteers from the North Central community, including Susie Amado and Rocio Ramire of Desert View; Jane Hoyle of Mountain View; Daniel Gomez of Orangewood; Harold Lozano of Richard E. Miller; Digna Crowe of Royal Palm; and Susan Granger and Joseph Macaluso of Sunnyslope.

Honorees were recognized on May 3 at the Lamp of Learning Awards Dinner.

Xavier’s Honor Choir took top honors at WorldStrides Heritage Festival on March 29. Winning all three awards for which they were eligible, the choir earned First Place Gold in the women’s choir division, earned the Adjudicator’s Award for a total score above 95 out of 100, and won the overall First Place Gold Award that included all 31 competing choirs.

The WorldStrides Heritage Festival takes place on the west coast every year and is open to any choir from anywhere in the country. 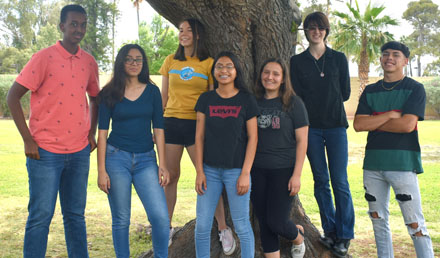 The MHP seniors will receive between $22,000 and $56,000 in renewable scholarships. The program provides equal access to education for Arizona students who demonstrate outstanding achievement, leadership, character, and thoughtfulness.

The program is open to Arizona residents, admitted to ASU in the fall who are degree-seeking, full-time freshmen (pursuing first undergraduate degree). This includes Native American high school seniors who are not residing in Arizona who meet the Arizona residency criteria for tuition purposes at ASU.