Phoenix Fire and Police emergency crews simulated an alcohol-involved crash on the school’s football field to educate teens about impaired driving. The reenactment included extricating injured victims from vehicles, demonstrating the DUI testing and arrest process, and bagging and transporting a DOA patient from the scene.

To be considered for this designation, students fulfilled several academic requirements. They are now eligible for a $2,500 scholarship and will be competing for one of 2,500 available National Merit Scholarships that will be awarded on a state-representational basis.

National Merit Scholarship winners of 2019 will be announced in four nationwide news releases beginning in April and concluding in July.

To earn this designation, DECA students had to perform an in-depth financial and marketing analysis about their school store business and compose a 50-page project for National DECA review. They will also participate in DECA’s International Career Development Conference in Orlando, Fla. 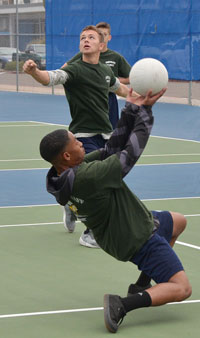 The Sunnyslope team captured first place in the relay, fris-ball, volley tennis, dodgeball, and the tug-of-war, and received the first-place trophy for the top overall team.

Fundraiser held in new Center for the Arts
Journey down the rabbit hole April 13, with The Madison Education Foundation’s Imagination 2019 gala, “Wonderland.”

At this inaugural event, held 6:30-11 p.m. in the new Madison Center for the Performing Arts, attendees will sip, nosh and experience a performance of Convergence Ballet’s production of “Alice in Wonderland.” Guests will have the opportunity to participate in a silent auction, two raffles and whimsical games. The evening will end with an after party complete with dessert and dancing.

Proceeds from the event support the Madison Education Foundation’s mission to enhance music and arts education across the entire district. Tickets are $100 for general admission and $150 for VIP attendees. VIP tickets include reserved seating to the performance, one raffle ticket providing guests an opportunity to have a seat named after themselves ($500 VALUE) and a signed print by artist Kat Katz.

Applications accepted for open enrollment
The Madison Elementary School District is accepting applications for Open Enrollment for the 2019-2020 school year.

Each of Madison’s schools features a program designed to focus students on an area of excellence including STEAM, Arts, International Baccalaureate, Spanish Immersion and REACH Highly Gifted and gifted programs.

In addition to academics, the district takes a comprehensive approach to address the social and emotional needs of the students. This includes specific wellness programs and having social workers at each school site.

Applications are being accepted online for seven of the eight district schools at https://madisonaz.org/enrollment/. Madison Traditional Academy has different enrollment procedures and is no longer accepting applications.

For more information about these programs, visit www.osbornschools.org or contact Nicole McNeil at 602-707-2006.

Solano School launches new Heritage Program
Solano School recently kicked off its new Roots Program for Native American students. The program is an opportunity for students to connect to their roots.

Roots Lunch & Learn for fifth and sixth graders is a series of monthly workshops/field trips. During their first workshop, Well For Culture founders Chelsey Luger and Thosh Collins led students through breathing and movement exercises and talked with students about wellness and holistic health from an Indigenous perspective.

Roots After-School Club for first and second graders is focused on cooking and gardening activities that connect students to traditional food sources.

It was the largest high school Olympic Weightlifting event in the history of Arizona with 17 schools and weightlifting clubs participating.

Espinoza’s artwork earn his a scholarship
Christian G. Espinoza of North High School was one of 32 students whose artwork was selected for scholarship prize money during the New Horizons High School Student Art Exhibition, which recently took place at the Shemer Art Center, 5005 E. Camelback Road.

Students host a prom for senior citizens
North High’s Future Business Leaders of America (FBLA) chapter on Feb. 9 hosted a Senior Citizen Prom as a community outreach project, teaming up with the City of Phoenix at a local senior center. Over 100 seniors had a chance to dance, eat, make new friends and new memories.

Guests were provided a free prom photo and were encouraged to make song requests. Even after Donna Summers’ “Last Dance” song played at the end, guests wanted to keep dancing.

Bailey receives prestigious award
WESD Assistant Superintendent Lyn Bailey has been selected as the Public Educator of the Year by the School Social Work Association of Arizona. This award recognizes those “who have made an exemplary contribution to the academic and social success of children by focusing on prevention and or intervention with children to enhance their academic, emotional, and social functioning.”

Bailey has been instrumental in implementing and maintaining social work positions in the district. This has ensured that students’ social and emotional needs are addressed.

Bailey also serves on the First Things First Advisory Board and participates in volunteer events regularly. Bailey will be honored at an awards breakfast March 1. 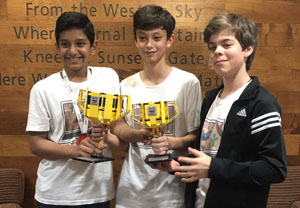 Sarreal’s team, the Desert Coders, also included Udbhav Akolkar and Wesley Nelson, and was coached by parents Saurabh Akolkar and John Sarreal. Sarreal attends All Saints Episcopal Day School, and Akolkar and Nelson attend to Scottsdale Prep. They are all in the seventh grade.

About 700 students in 95 teams participated in the competition that tests skills in robotics and the fundamentals of engineering design and problem solving. The students had to build and program small robots from a LEGO MINDSTORMS kit and then operate the robots in accordance with a series of prescribed maneuvers and tasks.

As the first-place winner, the Desert Coders will go on to one of the FIRST U.S. Championship events in Houston in April.

Empower celebrates growth of campus
Empower College Prep on Jan. 24 held a community event celebrating the expansion of its school campus, located at 2411 W. Colter St. The event was attended by more than 800 students, staff, and community members.

The school has been approved for $16.9 million in bond financing to turn the current junior high and high school campus into a $20 million educational center serving K-12 students. When completed, the campus will include a 13,000-square-foot gym and 68,000 square feet of classroom and office space.

The event also kicked off a $2 million capital campaign, “Building our Futures Together,” which will fund a community center and new cafeteria.

The school currently serves 400 students in grades 7-11 and will add 12th grade next school year. Empower’s elementary campus, located inside North Phoenix Baptist Church, has 250 students, who also will move to the Colter campus next year. Empower plans to add K-2 the following year (2020-21). The finished site will have capacity for about 1,200 students.

Local girl has feature role in stage play
She may only be in fourth grade, but North Central youth Kate Williams recently had a starring role in Valley Youth Theatre’s production of “The Miraculous Journey of Edward Tulane,” which ran for three weekends in February.

The play tells the tale of a self-absorbed china doll rabbit who encounters new friends on an unexpected adventure and learns how to love and care for others along the way.

Williams, 10, who attends All Saints Episcopal Day School, starred as Abilene, a little girl who loves her doll rabbit, even though he is vain and self-centered. On an ocean voyage, Edward is accidentally lost, leaving Abilene heartbroken. Williams says that the story is one of her very favorite books.

Williams recently appeared in VYT’s “Annie” as Molly, and in Spotlight Youth Theatre’s production of “The Best Christmas Pageant Ever” (Gladys).

It is very specific procedure that was introduced to the school by one of the parents, who has since been trained in it and volunteered on the Midtown Primary campus while getting her Barton Certification. She will continue helping the kids next school year as one of the tutoring specialists. 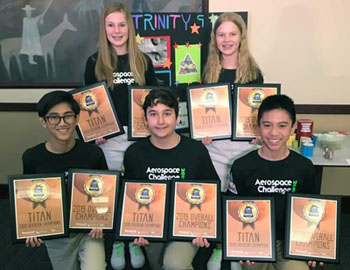 The five students on the Trinity 9 team created a scale model and written report about an International Logistics Mission to colonize Phobos, a moon of Mars, the primary purpose of this mission being the development of a plan to establish a sustainable base on Phobos with minimum support from Earth.

NASA astronaut Robert Gibson was in attendance and commended Trinity 9 team members on their knowledge of the material. These winning students from SS. Simon & Jude will enjoy a week at Space Camp in Huntsville, Ala., this summer and be featured at half-time during the Fiesta Bowl game.

“I am regularly awed by the quality of my students’ work, but never to the point of taking it as a given,” said art teacher and department chair, Alison Dunn. “Instead I see it as a shared blessing: The students listen, practice discipline, add their unique gifts and imaginations, and produce something that can lift us out of ordinariness and open all the windows that art can open.”