By Teri Carnicelli
Arizona native Amy Armstrong, a mother of two, was alarmed several years ago to learn about Arizona’s high dropout rate.

Already active in the philanthropic community, Armstrong founded Support My Club in 2012 after attributing part of the growing dropout numbers to the lack of extracurricular activities that help take some of the stress off academics, build camaraderie and support, and give students a place where they belong. She started with raising funds for programs at Camelback High School, and it quickly grew from there. 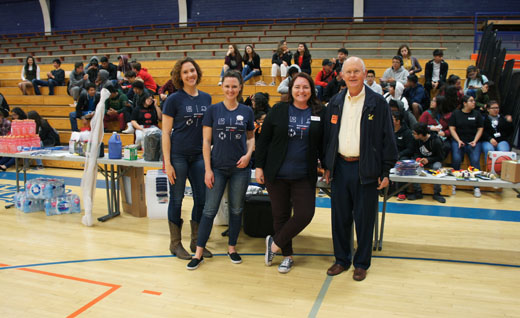 Since crowdfunding was already becoming a familiar presence in the general population, she used that idea to build an online platform to connect students in need with community donors. By providing an e-commerce solution where donors can supply needed items, Support My Club is able to equip students to pursue their interests and reduce their own out-of-pocket costs and time spent on fundraising.

Once a year, Support My Club holds a flash-funding event, encouraging community members to go the extra mile, whether by picking a specific school and a specific club, or through cash donations that the organizers can spread among different student requests.

While items that receive funding throughout the year are drop-shipped as ordered, after a flash-funding period, Support My Club brings many of the items to the schools in a an in-person distribution event.

Such an event was held, appropriately, on Valentine’s Day at Camelback High School, where Support My Club first began. A total of 26 clubs received several thousands of dollars worth of items at the Feb. 14 event, including: the Archery Club, which got two packs of arrows; the Wrestling club, which received four packs of ear guards; the Swim Club, getting several swim caps; the Culinary Club, which toted away five boxes of vinyl gloves and two 25-pound sacks of flour; white dress gloves and two wooden flag poles for JROTC; and several packs of Gatorade and bottled water for the Athletics Club.

Earlier in February, The Support My Club organization delivered $1,965 worth of donations to Metro Tech clubs and sports.

Requested items can range from $5 to thousands of dollars to cover registration and travel expenses to state and national events. All donations are tax deductible. Potential donors can search by ZIP code, school name or specific club activity. To learn more, visit https://www.supportmyclub.org.