By Dzevida Sadikovic
Growing your own food, even in an “urban desert,” can provide a sense of accomplishment and pride, as well as a bonding opportunity among family members young and old. And for refugees who have fled their home countries for reasons of persecution, war or extreme poverty, having access to healthy and nutritious food and little to no cost, that they have grown themselves, also helps them to put down roots in their new “home.” 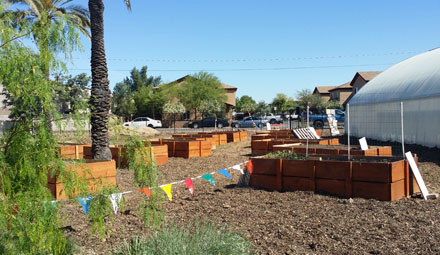 Raised garden beds and an aquaponics greenhouse cover what was once a vacant lot at 1616 W. Camelback Road, now home to the Camelbackyard Community Food Hub (photo by Dzevida Sadikovic).

The New Roots Camelbackyard space, 1616 W. Camelback Road, is a collaboration between the International Rescue Committee (IRC) in Phoenix, neighborhood supporters and business partners, with the goal of providing education, food access and nutrition programs to refugee families as well as interested community members.

Stanford Prescott, Community Engagement coordinator for IRC in Phoenix, said the goal of the New Roots Camelbackyard project was to create a “Community Food Hub” where people can learn about different agriculture systems as well as produce their own food.

A year after the completion of an aquaponics greenhouse and many raised garden beds, the site hosts programs such as interactive nutrition education classes and raised gardening workshops.

The walls surrounding the yard are decorated with murals. The aquaponics greenhouse is centered in the yard and raised garden beds and pots are purposefully arranged.

Aquaponics is a symbiotic environment where aquaculture (such as raising fish) is combined with hydroponics (cultivating plants in the water). The aquaponics greenhouse is managed by New Roots staff, volunteers and interns.

Hussein, originally from northern Iraq, came to the United States in 2009 and in 2010 he started farming in South Phoenix Spaces of Opportunity and selling his produce at farmers market in downtown Phoenix. Hussein, a third-generation farmer, said he is very fortunate to be able to continue his family tradition, and is grateful to be part of IRC’s New Roots program.

Currently at Camelbackyard a variety of fruits and vegetables are being grown, such as tomatoes, peppers, eggplants, herbs, leafy greens, cucumbers, carrot, radish, beans, turnips and amaranth. Seedlings also are being germinated for other New Roots community gardens and urban farms around the Valley.

There are still 4-foot by 6-foot raised garden beds available at Camelbackyard to “rent,” for those community members who are interested in growing their own food. Cost is $5 a month, for a minimum of six months. They are available to refugees, community members and community partners. For more information, call 602-433-2440.

Editor’s note: Dzevida Sadikovic is a student at the ASU Walter Cronkite School of Journalism and Mass Communication.