But first, a plan created by the city of Phoenix and neighborhood stakeholders, known as the Phoenix Indian School Specific Plan, must be tossed out. And it’s the city’s own Development Services Department that is seeking to eliminate the plan that affects more than 100 acres, controlled by four property owners: the city of Phoenix (park), the U.S. Government (VA campus), the state of Arizona (State Veterans Home), and the private owners who are seeking the redevelopment of the nearly 18 acres near the northeast corner.

A General Plan amendment is required to eliminate the many and varied zoning codes and overlays that currently apply to the larger area, some of which were added later and contradict the Indian School Specific Plan.

The adopted plan called for the following elements: a minimum 40-acre park site; historic designations for the three significant structures on the site; expansion of the Veteran’s Administration (VA) Hospital; 1.4 million square feet of office development; 100,000 square feet of retail development; and a minimum of 1,200 housing units.

Much has been achieved since that time, including: the creation of Steele Indian School Park, which opened in 2001; the preservation of the Memorial Hall, Dining Hall and Band Building structures from the original Phoenix Indian School, which closed in 1990; and expansion of the VA Health Care System campus. But so far, no office, retail or housing has been erected.

That remaining parcel, owned by Barron Collier Cos. for decades, was ultimately repossessed by the federal government after the company failed to meet certain financial requirements. The land was eventually sold at auction in early 2018.

The original Indian School Specific Plan included development standards that are no longer aligned with these many and various new requirements, and also laid out building height restrictions that are not compatible with the developers’ plan.

The Central Park
Currently referred to as The Central Park, the proposed development includes seven building in total, ranging in height from 165 feet to 355 feet.

Two 355-foot residential towers are planned for the north side of the property, featuring 150 for-sale condos and 250 market scale apartments. Another 165-foot residential building, abutting the park, will offer a 200-unit active senior living residence. 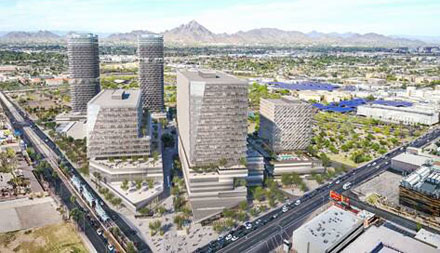 An early rendering of the proposed development currently dubbed The Central Park, at the northeast corner of Central Avenue and Indian School Road, shows a large public entry plaza at the corner with a wide walkway leading directly to the adjacent Steele Indian School Park (rendering courtesy of The Pinnacle Group).

Parking will be contained inside, at the base of each building.

At the corner of Central and Indian School itself will be a wedge-shaped plaza offering an acre of public space that will include seating areas and perhaps a water feature. It will be available for the local community to use for entertainment, mobile markets and other activities.

Similarly, the main plaza in the heart of the wide walkway, referred to as “The Canyon,” includes a large space that can be used for events such as live music, a farmers market and more. It may also include a water feature, such as a splash pad. The wide walkway itself, open to the public and connecting the street corner through to Indian School Park, will be lined with food and beverage retailers, with plenty of seating spaces, landscaping, and art features.

The developer is Valley resident F. Francis Najafi, founder and CEO of The Pivotal Group. His company was responsible for the redesign and re-launch of the Esplanade Mall on Camelback Road. Najafi has referred to The Central Park as his “legacy project,” creating something that is unique, long-lasting, and perhaps serving as a model for future mixed-use developments in urban cores.

“No other bidders on this land wanted to do such a mix of uses, or dedicate so much public space,” said Ben Tate of Withey Morris, PLC, which is representing the developers through the rezoning request process.

Tate says the design is intended to blur the lines between the project property and the park property, with no gates or barrier walls to separate them.

“They are really looking for seamless circulation—creating a gateway that will draw people into the park via a pedestrian-oriented environment.”

Public meetings were held in March, April and May. Both proposals—the Indian School Specific Plan repeal and the rezoning request—were approved by the Encanto Village Planning Committee at its May 6 meeting. They now go before the Phoenix Planning Commission 6 p.m. Thursday, June 6 in the City Council Chambers, 200 W. Jefferson St. They are tentatively scheduled for review and vote by the city council on Wednesday, July 3.