By Teri Carnicelli
On a fast-warming morning in late April, a group of volunteers armed with stencils and paint steadily moved up and down a few streets in North Central Phoenix, painting house numbers on the rounded curbs—and adding a logo to mark the “officially” designated neighborhood. 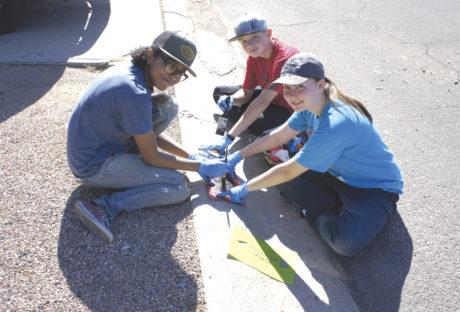 Local youth who volunteered on April 27 to paint house numbers and a sun logo on curbs in the Norton Vista neighborhood included, clockwise from left: Grace Williams, David Wiesinger and Rose Wiesinger (photo by Teri Carnicelli).

Long referred to by locals as Norton Vista, a small group of residents officially formed a neighborhood association wit the city of Phoenix earlier this year, and quickly got to work. They first identified the association’s boundaries as Cave Creek Road to 14th Street, and Mountain View Road to Dunlap Avenue.

The timing worked in the group’s favor, as they were able to apply for a city of Phoenix Love Your Block mini-grant. The fledging association was awarded $1,000 through the grant program, and the first project was born. “Refurb the Curb” involved repainting or adding the curb numbers in front of residences within the target area, which included Sunnyslope and Mission lanes and Eva Street.

Led by Lily Williams, the new coordinator of the Norton Vista Neighborhood Association, volunteers started early on the morning of April 27, and continued on through the mid-afternoon of April 28. Simultaneously, a mural was begun on the south-facing wall of the small strip center located at 9405 N. Cave Creek Road, anchored by The Orange Market. The owner of the strip center not only welcomed the public art, but also contributed $400 toward supplies, and even donated pizza to volunteers that weekend.

On Saturday, several Phoenix Police officers also stopped by to show their support for the revitalization efforts. Having visible house numbers on curbs also makes their jobs easier when trying to respond to a call for service.

The curb number painting project wrapped up over two more sessions, on May 18 and May 25. State Sen. Kate Brophy McGee, who lives in Sunnyslope, also came out to help paint on May 18. More than 400 homes benefitted from this project.

Additional grant funds will be used to fabricate and install three “message boards” along key boundary areas of the community, anticipated by the end of August. Williams explains that some of the residents in their area are seniors who don’t have Internet access or smart phones, and still need to get their information “the old-fashioned way.” The message boards can be used to publicize neighborhood meetings, warnings about crime activity, important contact information for city of Phoenix departments, and more.

The message boards are being constructed by Jim’s Sheet Metal and Welding, a longtime Sunnyslope business.

Metal message board toppers with “Norton Vista” cutouts are being manufactured locally by Xann Plasma and Laser Cutting, 9214 N. 13th Ave., which also cut the number and “sun” logo stencils for the group.

The Norton Vista Neighborhood Association meets the second Monday of the month at the Sunnyslope Village Alliance building, 755 E. Hatcher Road. The next meeting is set for 6:30 p.m. Monday, June 10. For more information, e-mail nortonvista85020@gmail.com.