By Teri Carnicelli
The city of Phoenix’s Historical Preservation Commission is exploring what options it has to save a home built in 1918 from being torn down.

The home, located at 7019 N. Central Ave., is often referred to as the William F. McElroy house. It is a two-story, three bedroom, two bath home that sits on just over 1.2 acres of prime land, adjacent to the Murphy Bridle Path. 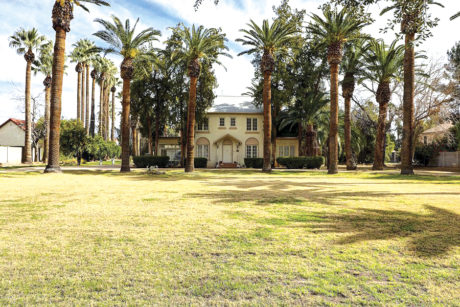 The William F. McElroy house, built in 1918 and located at 7019 N. Central Ave., has a large grassy area and circular driveway lined with palm trees, creating a large buffer space between the home and the adjacent Murphy Bridle Path. The owner of the small house, which sits on more than an acre of land, is seeking to tear it down for redevelopment (submitted photo).

According to the Maricopa County Assessor’s office records, the home is owned by Young America TR, in care of David H. Young, with a last deed date of July 1998. The property currently is zoned R1-10, which would allow for a subdivision of 10,000-square-foot lots, give or take. On just over an acre, that would be about four new homes.

However, the property is subject to the North Central Avenue Special Planning District. The R1-10 subdivision standards were modified to include a minimum 100-foot lot frontage onto Central Avenue; a 40-foot wide landscape and building setback along Central Avenue; and increased side yard setbacks for one- and two-story development.

These provisions were adopted to encourage the preservation of the large lot, single-family residential character—something that has been slowly disappearing along Central Avenue.

According to Anne Ender, president of the North Central Phoenix Homeowners Association (NCPHA), in recent years the area has lost roughly 15 acres of property to development, including 2 W. Marlette Ave., where four homes now occupy a 1.2-acre lot that once had a single-story adobe home with a more than 150-foot setback from the street. This is just one example of residential redevelopment projects that are “changing the character of North Central,” according to the NCPHA, which has come down strongly against the home at 7019 N. Central Ave. being torn down.

The William F. McElroy home was first listed for sale in February 2017 for $1.9 million but the listing was removed in May that same year. It came back on the market in February of this year for $1.85 million, and reports are that a developer is interested in the property—provided the home can be razed. 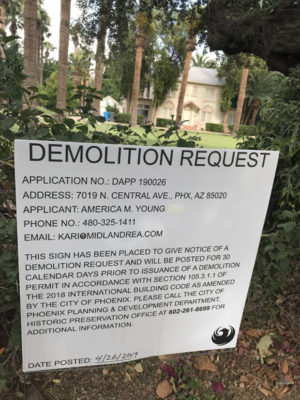 A notice of demolition was posted on the property located at 7019 N. Central Ave. on April 26 (photo by Teri Carnicelli).

A demolition permit, submitted by the current owner, was scheduled to be posted on the property on April 26. The city’s building code allows for a 30-day hold on demolition permits for homes that are eligible for placement on the Phoenix Historic Property Register. This home was deemed “eligible,” and so the 30-day hold was enacted.

“It’s up to the city council whether to list it or not,” Michelle Dodds, Phoenix Historic Preservation Officer, explained. And with the North Central Avenue Special Planning District already in place, “there are other concerns beyond historic considerations on this one,” she added.

Once the historic review is initiated, Dodds has three days to approve or cancel the demolition permit, which in this case, would most likely be cancelled. At that time, the homeowner can appeal Dodds’ decision to a Phoenix hearing officer, arguing that either the property is not historically significant, or claiming economic hardship will result from the permit denial. City code stipulates that the case must go before the hearing officer within 20 days the permit being denied, putting that hearing sometime in June.

The hearing officer’s decision can then be appealed back the Historic Preservation Commission, and any additional appeals from there go on to the City Council for a final ruling.

That process, Dodds points out, takes place much faster than the process to list a property on the city’s historic register and initiate the protective zoning overlay. So should the Phoenix City Council ultimately decide the home has no historic significance, or that denying the demolition permit has put undue financial hardship on the owner, the home could be gone long before the historic designation review is completed, effectively ending that process.

The Phoenix Historic Preservation Commission is set to discuss whether to initiate the historic designation review process at its May 20 meeting, set for 4:30 p.m. in the City Council Chambers, 200 W. Jefferson St.

A letter submitted by the NCPHA to the commission in support of beginning the historic review process stated that the house is “a significant example of the development of North Central Phoenix in the early years of statehood. The home is … truly a diamond in the rough.”