By Madeline Ackley
When Phoenix natives hear the name “Hatcher Road,” it usually conjures up images of blight, crime and unsightly industrial storefronts.

But a little over a year ago, a group of business owners along Hatcher decided enough was enough and formed the Hatcher Urban Business Alliance (the HUB), which is determined to clean up the business corridor and revitalize the surrounding Sunnyslope area. 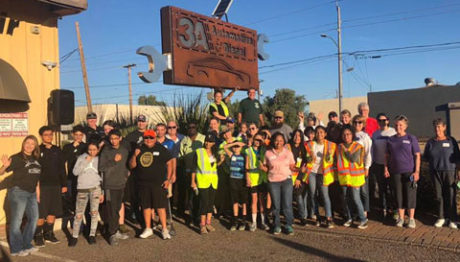 Members of the Hatcher Urban Business Alliance (the HUB), as well as residents from the nearby West Sunnyslope Neighborhood Association and other community volunteers, celebrate their first neighborhood clean up event in October 2018. Similar cleanups have taken place nearly monthly since then (photo courtesy of the HUB).

“Since my husband and I own a business on Hatcher, we felt compelled to do something about the look and feel [on Hatcher],” said Caroline Lobo, who co-chairs the HUB along with Nadine Alauria. Lobo is co-owner of Pawgo, a mobile grooming business, and Alauria and her husband own 3A Automotive & Diesel Repair.

In the past year, the group of business owners between 19th Avenue and 12th Street have organized monthly meetings, street cleanings and “meet and greets,” among business neighbors as well as area stakeholders, including the local elementary school and neighborhood groups such as the West Sunnyslope and East Sunnylope Neighborhood Associations.

But Lobo, a trained architect, is also interested in integrating the arts as a way to beautify the street and attract new businesses and residents. The organization recently helped to promote the Sunnyslope Food & Music Crawl in March, and the annual ’Slope Fest in April.

The group of about 20 to 30 active business owners share the belief that Sunnyslope is more than its less-than-sterling reputation. It’s a special place with a vibrant history and a small-town feel, built right in the backyard of the picturesque Phoenix Mountains Preserve.

Even as national retailers move into the Sunnyslope area, many businesses that line Hatcher Road are local, mom-and-pop shops that have been open for decades.

“People just don’t move that much from that area,” said Phoenix District 3 Councilwoman Debra Stark, who represents the Sunnyslope area. “[Residents] have a real strong connection to Sunnyslope … it gives people a sense of pride and identity.”

Stark has been in the fight to improve Sunnyslope for many years, and said she’s very supportive of this latest effort to activate the street.

Much of what the HUB is trying to accomplish is still in the planning stages, and with just a year under their belt, there’s still much to be done.

But those who live and work around Hatcher Road have said they’ve noticed a change in the past year. The streets and storefronts are cleaner, and there’s less panhandling and graffiti.

Krista Roy, the self-described “happiest neighborhood specialist in all the land,” acts as a bridge of communication between the Sunnyslope community and the City of Phoenix. She drives down Hatcher Road every day and said she’s noticed a dramatic difference already.

“I cannot believe how much they’ve done for this community,” Roy said. But she added that the biggest change is in the attitudes of Hatcher-area residents.

“I think people are feeling the pride in their neighborhood again,” said Roy. “They see that others care and that stuff is kind of contagious.”

It’s not the first time businesses along Hatcher have organized. In 2004, the Hatcher Road Committee was formed and along with outside partnerships, developed an overlay district which would improve walkability and tree cover along the roadway. The overlay district was approved in 2008.

Then the recession hit.

In 2013, John C. Lincoln Hospital’s health network, a longtime financial contributor to Sunnyslope community-building efforts, became affiliated with Scottsdale Healthcare and merged soon after to form HonorHealth. All of the sudden, money wasn’t coming like it used to.

Since then, community efforts to tackle blight and discourage crime have done a bit of a backslide.

“Once the economy tanked … the whole excitement of working on Hatcher kind of stalled because there was no money to invest,” Lobo explained.

Brand-new businesses are setting up shop in and around Hatcher Road. There’s a new Circle K at 7th Street and Hatcher, and the enormously popular Little Miss BBQ opened a second location in the heart of Sunnyslope.

In a recently monthly meeting at HonorHealth’s Cowden Center, the group of business neighbors welcomed several artists and planners who brought their vision for Sunnyslope to the table. There was talk of murals, an increase in light fixtures along the street, and an art walk reminiscent of First Friday along Roosevelt Row. Artist and local commercial developer, Larry Ortega, even suggested trying to attract a culinary school.

But not everyone at the meeting was in agreement with how to proceed in cleaning up the area.

The St. Vincent de Paul (SVDP) dining room off of Hatcher and 10th Avenue was a point of contention at the meeting. SVDP operates a “soup kitchen,” which serves meals and connects clients to a variety of social service programs.

Greg Barton owns a fireplace business adjacent to the dining room, and addressed a longstanding issue he’s had with homeless people sleeping and loitering outside of his business, waiting for the soup kitchen to open. He said he has also witnessed SVDP clients doing drugs nearby.

“I sell fireplaces and that’s all I want to do. I don’t want to have to call the police every 20 minutes.”

The concern about homelessness and drug use in the area was echoed by others at the table.

Jim Baker, the kitchen manager at SVDP, was not present at the meeting. “Believe me, I understand (the concerns),” he said. In response to community criticism, Baker said the dining room extended its fenced area around the property and updated its security cameras. But, he points out the dining hall serves not just the chronically homeless and those with mental health and substance abuse issues. A growing segment of the community using the dining hall are families who are struggling financially.

Despite disagreements in how to improve the area, whether it be through art or arrests, business owners at the HUB meeting were overwhelmingly optimistic.

“I think we all feel the energy and we know that change is not coming, it’s here,” said Lobo to the room full of business owners.

“Nobody can stop us.”

Editor’s note: Madeline Ackley is a student at the ASU Walter Cronkite School of Journalism and Mass Communication.