By Teri Carnicelli
The Royal Palm neighborhood saw the installation of its first alley gates on Dec. 8 and celebrated the occasion with balloons, doughnuts, coffee and a host of residents and city representatives. 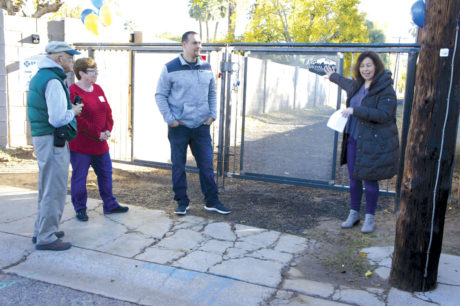 The event was the culmination of more than two years of effort by members of the Royal Palm Neighborhood Council, urging the city of Phoenix to create a program whereby residents could close off troubled alleys with secured gates and prevent issues like illegal dumping, alley “campers,” and abandoned shopping carts, as well as reduce residential crime by cutting back access to back yards from unsecured alleys.

The city in mid-2017 ultimately agreed to launch a pilot Gated Alley Program (GAP), with Royal Palm and Sunnyslope being identified as the two launch areas. The Royal Palm neighborhood is defined as the area from Northern to Dunlap avenues, and from 19th to 7th avenues.

The first gate installation is on the east side of 15th Avenue, between Ruth Avenue and Orchid Lane. The gate was designed by Royal Palm resident David Takeuchi, who works at a local architecture firm. He designed the metal gate with a roll bar at the top, which prevents a person from getting a hand-hold to be able to climb over the fence, and also can deter coyotes from trying to go over the fence as well.

The fence was fabricated by E2 Innovations in Phoenix, and the installation came with help from Hurricane Holes, which dug the post holes for the gates.

Three more installations are planned in the next couple of months, also east of 15th Avenue.

“Councilwoman Debra Stark helped us navigate the process through numerous departments in the city, and it took about a year,” said Hillary Rusk, one of the board members of the Royal Palm Neighborhood Council.

“I’m really proud of this program,” Stark said at the event. “It’s not going to stop every problem, but I really think it’s going to help.”

Former Dist. 5 Councilman Daniel Valenzuela was actively involved in GAP, since part of Royal Palm falls into the Dist. 5 area. Councilwoman Vania Guevara has pledged to continue to help residents in her area with the process of getting alley gates.

The program incorporates both relocation of solid waste service from the alley to the curbside, and installation of gates at the ends of identified “troubled” alleyways. Homeowners abutting the alleys in question must agree to the installation of the gates by 50 percent, plus 1.

However, the cost to purchase and install the gates will be the responsibility of the homeowners. Costs are estimated at approximately $2,800 per alley for chain link fencing/gates or $5,000 per alley for wrought iron. Homeowners will be responsible for ongoing maintenance and repair costs of the gates.

Royal Palm was quick to secure funding for its first four gates. Some residents contributed, but the bulk of the funds came from a donation made by Blue Cross Blue Shield of Arizona, whose offices are nearby at 2444 W. Las Palmaritas Drive. Also the city amended its categories for neighborhood Block Watch grants to include alley gates, and Royal Palm was the first to receive a $5,000 block watch grant for this purpose.

The East Sunnyslope Neighborhood Association & Block Watch is beginning the process to apply for grant money and identify alleys in that area that could be closed off.

“I hope the city will eventually see the value in this and give the opportunity to all older neighborhoods that area dealing with these issues of crime and blight in their alleyways,” Rusk said.