By Colleen Sparks
It can be difficult to imagine adults forgetting their own names and where they live and not recognizing their family members.

But for those suffering from dementia, those memory losses are part of their reality. Hospice of the Valley is doing its part to help caregivers and anyone who comes into contact with dementia patients to understand the frustration, fear and anger they might feel as they struggle to remember things and perform everyday tasks. 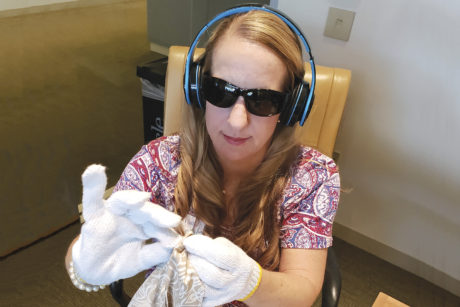 The local non-profit organization’s internationally known dementia team has created “Dementia Moments,” a virtual experience that can help people feel as though they are walking in the shoes of someone with dementia. Nurses, nursing assistants, doctors, social workers and teachers have tried the exercise, in which they put on sunglasses that severely impair their vision and headphones that blare static, making it impossible to hear and understand instructions to put on a belt, sort loose coins or sign a document. During the training they also wear thick gloves to mimic the sensation of having numb fingers.

While these tools in the dementia experience have been around for many years, Hospice of the Valley is unusual in that it has brought in enough to provide training to about 40 people at once.

“We took the concept and put it into a bag with headphones that could be done at your desk,” Gillian Hamilton, administrative medical director at Hospice of the Valley said. “What we’re really trying to do is stress the learner in the same way that somebody with dementia is stressed. We’re not mimicking the experience of dementia exactly, of course; we’re just trying to get a feel for what it’s like. We’re doing the same thing with caregivers, to have them understand a little, to have them have empathy.”

Hamilton also is a professor of practice at Arizona State University and on the faculty at the University of Arizona College of Medicine. She teaches a course in Alzheimer’s disease at ASU, in which students visit with people suffering from the disease.

Hospice of the Valley has provided the dementia training to teachers at Arcadia High School, including Eric Bodznick, who teaches bioscience.

“It was very eye-opening,” Bodznick said. “I’m very interested in partnering with Hospice of the Valley. They’re building a new unit next to Arcadia (High School). I’m hoping to get students in as interns. The prevalence of dementia is on the increase.”

He taught 125 students in his biotechnology classes about dementia. Students did research and presentations  and talked about a possible genetic tie to the disease.

“One of the biggest factors that really hooked them in is that, one in three students (in Arizona) today will know personally someone affected by Alzheimer’s or have to support a parent or grandparent or loved one,” Bodznick said.

Hamilton said dementia is “an umbrella term for people who have difficulty with memory and other parts of thinking.” Alzheimer’s disease is the most common cause of dementia in older adults, according to the National Institute on Aging.

During a recent training in the dementia experience that Hospice of the Valley provided, trainees fumbled their way through doing basic tasks while immersed in the goggles and other tools hindering their abilities.

“I was getting sick to my stomach,” said Michelle Bales, a Hospice of the Valley social worker. “It was torture for me. I was scared.”

Those eight minutes felt like an eternity, she said.

“I needed it to be over,” Bales said.

Others reported they felt lost, anxious, helpless and nauseated.

Hamilton offered tips for anyone interacting with someone who has dementia. She said people should always treat those with dementia with “dignity and respect” and to “always be supportive.”

“Avoid criticizing because they are not going to understand, and never argue,” Hamilton said. “We talk a lot about yes. If they say, ‘I want to go home,’ you say, ‘yes, and tell me about your home.’ It’s their journey. Speak slowly and give them time to answer.”

To learn more about Hospice of the Valley, visit www.hov.org. For more details on dementia, visit the Alzheimer’s Association at www.alz.org.