Editor’s Note: A final decision on this issue has not yet been made, and the Zoning Administrator will hear the case (after a 30-day postponement) on March 14. In the interim, the city and nearby business owners are continuing to work with the franchise owner to find solutions to the traffic and parking problems, outside of having the use permits/variances revoked, which might allow the store to remain. A follow-up story will appear online after the hearing, and in print in our April issue.

By Mara Friedman
The Dutch Bros. at the northwest corner of Central Avenue and Camelback Road, which has created traffic and parking issues almost since the day it first opened, could shortly be relocating.

While a decision to move the Dutch Bros. at 4 W. Camelback Road has not yet been decided, the possibility was discussed at a Feb. 15 Phoenix Zoning Adjustment hearing. A lawyer representing Dutch Bros. said at the hearing that a new location is being explored further west, at 140 W. Camelback Road. 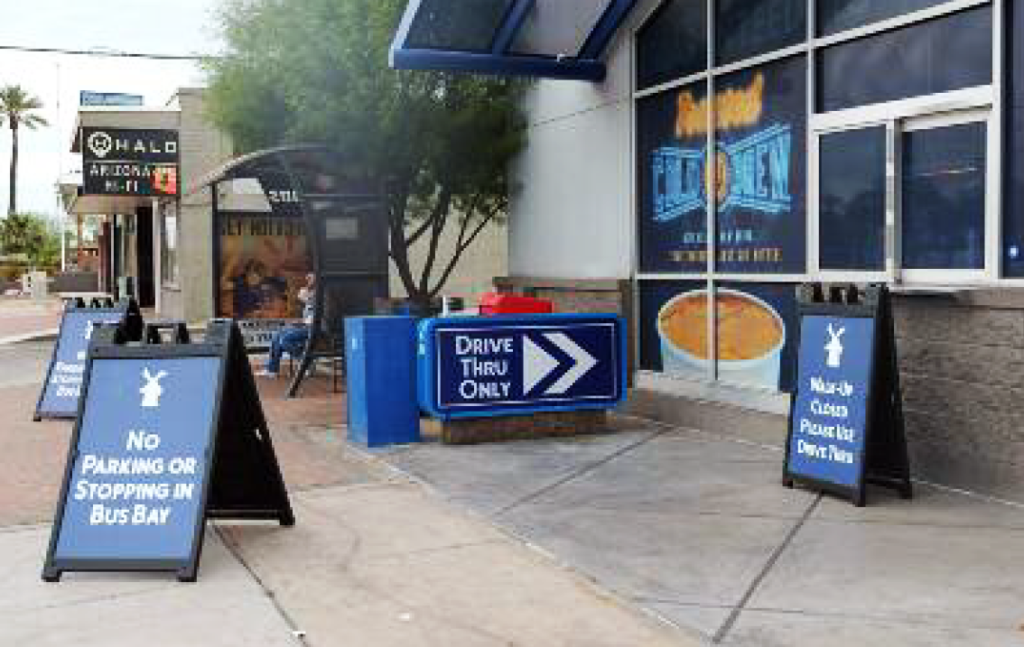 Despite putting out “no parking” signs and even closing its walk-up window, the Dutch Bros. at Central Avenue and Camelback Road couldn’t stop its customers from illegally parking or blocking the bus bay and alley access to adjacent businesses (photo by Mara Friedman).

The city of Phoenix Planning and Development Department filed an application to seek possible revocation of the business’s use permit for its drive-through, as well as a variance to allow use of the public right-of-way (alley), after receiving numerous complaints from adjacent business owners who said their customers couldn’t get to them because the alley was continuously clogged with cars, or people were parking in their businesses’ spaces so they could walk up to the order window at Dutch Bros.

The traffic congestion at that corner, a busy intersection across from a light rail stop and with a bus bay directly in front, became a public safety concern, according to city officials.

The store closed its walk-up counter in attempt to be a good neighbor and lost 17 percent of its sales, said Jim Thompson, the franchise owner of the store. It was assumed that if nobody had to park a car, the issue could be resolved.

That clearly was not the case, according to Trent Martin, owner of the 22-year-old skateboard shop Cowtown at the strip mall directly to the north. Martin said that he has had customers that are Yelp users publish that they left before entering the store because they were inconvenienced by the lack of parking.

“It’s an old building where there is one row of parking. When you back out of our parking lot you are backing onto Central, basically. They can’t loop around the property because the Dutch Bros. drive-through blocks the lanes,” Martin explained.

Kimber Lanning, owner of Stinkweeds, located in the Medlock Plaza directly to the west, spearheaded a letter-writing campaign by affected businesses owners who had long fought against the illegal parking issue, even going so far as to make up “No Dutch Bros. parking” sandwich boards that could be placed out near their designated parking spaces.

Dutch Bros executives contend they attempted to address the complaints they had received. However, Lanning argued their security guards don’t enforce the rules.

“Management says ‘that’s not the Dutch way’,” Lanning said in a form letter she drafted, proving that “the guards are just for show and not actually there to make it safer.”

Gammage and Burnham lawyer and Dutch Bros representative, Cameron Artigue, admitted the current site has unique and perhaps unfixable problems. “Were we opening a brand new store in 2019, this is not the sight we would pick,” said Artigue, adding that attempting to reconfigure the property was not an optimal long-term solution.

As a result, he had a pre-application meeting with the City of Phoenix on Feb. 14 to discuss transitioning the shop’s location to 140 W. Camelback Road. Due to that meeting’s pending decision, Artigue requested a 30-day continuance to the zoning adjustment hearing.

Thompson deeply apologized for inadvertently creating what had become an unworkable situation for many. Thompson said that after the recession, he didn’t expect sales to blow up to $10,000 dollars a day. He recognized the grief caused, and said that after a lot of contemplation, the win-win situation would be to move the store.

Lindsey Leavitt, a lawyer from Jennings Strouss, which represents many of the businesses adjacent to Dutch Bros., is confident the shut down will occur whether Dutch Bros. commits to another location or not.

Pending a decision from the city’s zoning administrator, neighboring shop owners requested that Dutch Bros. bring its security guards back and provide them with the teeth to enforce the no parking regulations and prevent cars from blocking the alley or city bus bay.