By Colleen Sparks
While some people who crave furry friends might find small puppies attractive, a local non-profit organization is urging people to take a chance on older dogs that need foster care and forever homes.

Almost There Foster Care (ATFC), founded in 2013, rescues dogs, focusing on large breeds, as well as pregnant and nursing dogs and their puppies. 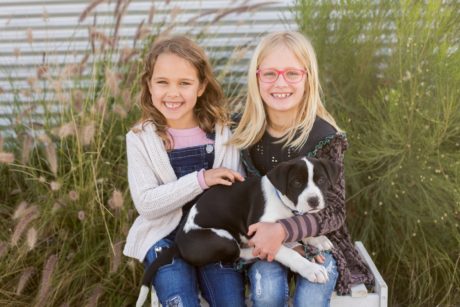 “Our mission is really to help those dogs in need and lower euthanasia rates,” Geri Hormel, executive director and founder of ATFC, said. “We focus on those pregnant and nursing dogs. Not many rescues have the time and space and the care that’s needed for these dogs.”

Hormel said her organization has nine kennels, with some large enough to house the mother dogs and their puppies. ATFC offers them a “cleaner, quieter” and less stressful temporary home than they might find in other animal shelters, she added.

ATFC will share its call for foster and adoptive families at its 3rd Annual Imagine: A Black and White Affair from 6 to 10 p.m. on Saturday, Nov. 2, at Wrigley Mansion/Geordie’s Restaurant at 2501 E. Telawa Trail. The event will raise funds for ATFC and its partner, Community Canine Project. The evening includes a chance to mingle with puppies, indulge in drinks and nibbles and enjoy live music, a raffle, a silent auction and other entertainment. Proceeds will  go toward food, vaccines, spay and neuter treatments, microchips, kennel upkeep, grooming supplies and other necessities.

While many people believe they want to adopt puppies so they can train them, there are advantages to adopting older dogs, Hormel said.

“I’m all about the moms and the adult dogs because you know what you’re getting,” she said. “You know what they’re going to look like. They’re not wanting to chew on every thing or pee over everything.”

An animal lover who started getting involved in animal rescue at 16 years old, Hormel is the daughter of the late Geordie Hormel and his wife, Jamie, owners of the Wrigley Mansion.

Like many non-profit organizations, ATFC relies on volunteers to help with tasks including feeding dogs and helping them get socialized, as well as walking them. It also has many foster parents who take dogs or puppies home. The visits with the foster parents might last two days or longer.

“We really are trying to grow our foster program,” Hormel said.

Foster parents give the dogs a nice break from the kennels and also give the humans a chance to get used to a dog if they are thinking about adopting one.

Emily Grieff adopted her dog, Ozzie, from ATFC. She said she had been looking for a dog and discovered the organization on Facebook with pictures of black and white puppies.

“We arrived at ATFC and were blown away,” Grieff said. “Their love for animals and passion for giving the best care to their pups and mamas is obvious from the moment you arrive on site. We instantly fell in love with all the puppies and chose our boy, Ozzie. We still had two weeks before we could take him home so we went back several times to visit, introduce our kids and love on the pups. After a long two weeks we brought Ozzie home. He had his first round of shots, was neutered and already used to using a doggie door.”

She said Ozzie loves to cuddle every chance he gets.

“I am so grateful that ATFC popped up on my Facebook feed that fateful day, we have the best dog as a result!” Grieff wrote.

“We went to ATFC just intending to take a look at Bevvy, but once we held him we knew he was coming home with us,” Michael and Emily wrote. “ATFC streamlined the entire adoption process, including taking care of getting Bevvy neutered and giving him his first shots. We wouldn’t trade our experience with Bevvy and Almost There Foster Care for anything.”

To expand its outreach, ATFC bought the property on East Indian School Road at 26th Street where The Secret Village used to be located. The rescue organization hopes to move into the site by the summer of next year. Of the three buildings on the site, ATFC plans to use one for its own operations and lease a second one to Community Canine Project, which is operated under Almost There Foster Care’s non-profit status. Community Canine Project helps city shelters with grants and enrichment, socialization and play groups for dogs. It also brings dogs to ATFC. Plans for the third building include the possibility of a low-cost veterinary clinic.

In addition to the 3rd Annual Imagine: A Black and White Affair, ATFC also will host an event called Puppies, Pilates & Prosecco on Nov. 29, also at Wrigley Mansion.

To learn more about ATFC and these events and to buy tickets, visit www.atfcaz.org.