Even though his father, Gene, won’t be there to see it, Scott Snyder, co-founder of Scott’s Generations, is looking forward to celebrating the 30th anniversary of the business the duo started together. But he won’t be celebrating alone, as his “North Central family” of friends and longtime customers prepare to mark the birthday of their favorite New York-style deli and restaurant. 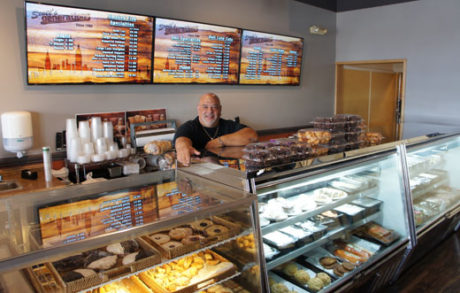 Scott Snyder, owner and co-founder of Scott’s Generations, says the bakery and deli counters bring their own business into the restaurant and deli, and many dine-in customers like to grab a dessert or some smoked fish to take home (photo by Teri Carnicelli).

“There’s not a lot of us locally owned, family owned restaurants still around, especially after 30 years,” Scott points out. “We’re pretty proud to say we’ve made it this long.”

Gene and Scott Snyder relocated here from New York in 1988. They opened up Scott’s Generations in a strip center at 7th Street and Missouri Avenue in June 1989—30 years ago this month.

Scott recalls that since his dad had two previous delis in the New York area with “Gene” as part of the name, he felt it was Scott’s turn to have his name of the business. Particularly since Scott was only 22 years old, and Gene didn’t want people to mistake Scott as an “employee” of the business rather than a co-owner.

The father-son pair originally split the responsibilities with Scott in the back, doing menu and recipe development and the majority of the cooking, and Gene in the front overseeing the deli counter and customer service.

After Gene passed away four years ago, Scott took on the full-time running of the business. And business has been good—particular since the restaurant moved two years ago to a new space in the Madison Village Marketplace at the northeast corner of 7th Street and Glendale Avenue.

Scott explains he took advantage of the move to create the space from the ground up—literally, putting in new floors, new deli cases, new tables and chairs, and more. He even upgraded the business’s technology, adding digital menu boards, a digital register, and a private space with A/V hookups and a drop-down screen for business groups to meet in. Most of those technological upgrades and design came courtesy of Scott’s son, Ross Snyder, who is president of White Tie Productions in Tempe.

But one thing that hasn’t changed is the quality and diversity of the food, from a wide selection of baked treats and deli meats in the cold cases in front, to a breakfast and lunch menu that offers big flavors—and big portions.

The bakery counter sports a generous selection of bagels (great paired with lox) as well as muffins, cookies and pastries, including an East Coast favorite, rugelach. Over in the deli counter, you will find the aforementioned lox, along with other smoked and pickled fish, meats, latkes, stuffed cabbage, chopped liver, chicken salad and more. The corned beef and pastrami are house specialties—and customer favorites.

In fact, one of the biggest lunch sellers is the Scottwich, with a pile of pastrami that’s not shaved until you order it, Swiss cheese and grilled onions on garlic rye bread. Other top sellers are the Rueben-Rueben, with corned beef, pastrami and sauerkraut, and Mike’s Jumbo Philly Cheesesteak. Pair them with New York originals, Dr. Brown’s soda (can), a Yoo-Hoo, or a chocolate egg cream.

There are also “healthier” options including a selection of seven different lunch salads (chef, cobb, taco, Greek, etc.), stuffed cabbage, a grilled chicken club, and a knish with a small bowl of soup. Some of the heftier sandwiches can be made more manageable with “The Britt,” a half-order of any deli sandwich with a small bowl of soup. There also are two vegetarian sandwich options.

Breakfast also is bustling, particularly since the nearby Paradise Bakery Café was bought by Panera Bread Co.—and then shut down. You will find your usual omelets, skillets and pancakes, along with cheese blintzes, latkes, corned beef and hash, and steak and eggs. The menu also includes gluten-free pancakes and even a gluten-free bagel to enjoy with your lox.

With few other sit-down breakfast options in the neighborhood, Scott sees a lot of business in the mornings. And that business picks up even more on weekends, when Scott’s Generations gets a respectable number of orders for delivery via PostMates.

Several mornings a week you will find area groups, from service organizations to book clubs to entrepreneurs needing meeting space, using that private area that seats 35-40 and offers its handy A/V system.