By Teri Carnicelli
The overabundance of restaurants that line both sides of 7th Street between the two “M’s”—Maryland and Missouri avenues—may have finally reached a tipping point. In the last month alone, four of them abruptly shut their doors.

The first to go was Farm & Craft, operated by Riot Hospitality Group and located in The Colony retail center at 5538 N. 7th St. The Colony is an adaptive re-use project located on the west side of 7th Street just north of Missouri Avenue.

Farm & Craft, which also has a Scottsdale location and touted “healthy and sustainable food,” barely made it to the one year mark before closing in early June. And with its closing, Riot Hospitality has exited the Central Phoenix marketplace, but still maintains other restaurants in Scottsdale and Tempe. 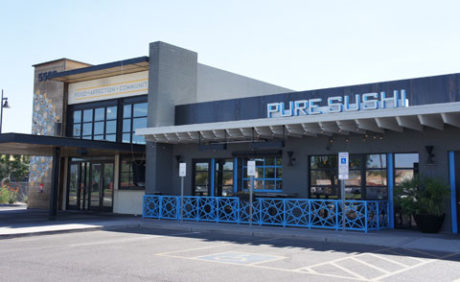 Farm & Craft and Pure Sushi, both located at The Colony retail center at 5538 N. 7th St., closed unexpectedly last month. Pure Sushi was one of only two remaining original restaurant tenants of the center (photo by Teri Carnicelli).

It wasn’t the only restaurant to shut its doors recently.

Right next door, Pure Sushi—one of the original tenants at The Colony—unexpectedly closed down on June 9. It was so unexpected, in fact, that employees were reportedly only given 24 hours’ notice of the impending closure.

Pure Sushi opened in July 2016. It had a popular happy hour and touted a bar well stocked with sake bottles. The north Scottsdale location remains open.

It has been a challenge for The Colony to retain its restaurant tenants. When first launched, The Colony housed Stock & Stable, Pure Sushi, The Herb Box and Casa Añejo Tacos + Tequila. The only one that has been there from the beginning—and celebrated its third-year anniversary last month—is Stock & Stable.

“From the start, Stock & Stable was specifically designed to cater to the surrounding neighborhood, offering a cozy yet stylish space to kick back with friends and family,” said Diane Corieri, co-owner of Stock & Stable. “Chef Joe Absolor and GM Jason Lothner are both residents of the North Central community and have embraced the culture of the area.”

The east side of 7th Street also has felt the brunt of the restaurant glut. The popular Joe’s Midnight Run was sold in January 2018 and then unexpectedly closed by the new owner just two months later. The building at 6101 N. 7th St. was sold again and the laid-back vibe of Joe’s was replaced by Hatter and Hare—which closed last month after not quite a year in business.

Hatter and Hare had a sort of “Alice in Wonderland” concept and was part of the Glass Half Full Hospitality Group, which relocated from the Chicago area.

Camp Social, next door to Hatter and Hare and also part of Glass Half Full, abruptly closed less that a week after its sister restaurant across the parking lot. Featuring a “camp theme” complete with indoor tire swing seats at the bar and an old travel trailer converted into a private seating area, Camp Social was open only two years.

However, some businesses continue to thrive in the corridor, despite their many and various competitors.

Further down 7th Street at Missouri Avenue, family business Spinato’s moved from its longtime 12th Street and Glendale location to the Cinema Park Shopping Center in November 2013. Anthony Spinato is vice president of Spinato’s Pizzeria and Family Kitchen and son of the original founders, Ken and Elaine Spinato. He says one of the key factors to bringing in customers, and keeping them coming back for more, is quality service.

At Spinato’s, employees are part of the family (in some cases, they actually are family members), and many have been there a decade or more.

“We have always been in the people business, never mistakenly thinking we are in the pizza business,” Spinato says. “That is the first thing I communicate to our new team members in our employee orientation. They all have to be contributors to our culture, our environment—not consumers. I believe that our people (staff) do that better than any other restaurant in town.”

“Chain” type restaurants that have multiple locations, such as Pita Jungle and Cold Beer & Cheeseburgers, could potentially stick around even if one location is not as successful, because of the support of the larger group.

Cold Beer & Cheeseburgers, which opened at 5625 N. 7th St. in March 2017, is part of Square One Concepts, with locations in California and Arizona. Currently there are 11 Valley locations, with two more openings planned this year.

“While the summer months can be challenging for restaurants, we’re pleased with our 7th Street location,” Rinzler said. “We do have great food, a comfortable, lively environment and when people walk in they want to stay a while.”