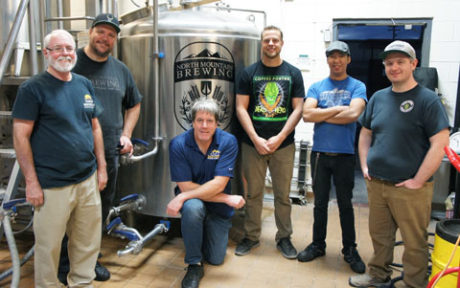 Current and former brewers at North Mountain Brewing who collaborated on a season winter ale dubbed “Ghosts of Brewers Past” are, from left: Jerry Grant, who worked at NMT for about a year and retired in mid-2015; current MNT brewmaster Greg O’Donahue; Rob Berkner, co-owner of North Mountain Brewing; Alan Van Lohn, who was part of the brewery’s opening team and left in April 2014; Miguel Hidalgo, currently the assistant brewer; and Cody Richey, who worked at NMT for just over a year and left in November 2016 (photo by Teri Carnicelli).

Stop by North Mountain Brewing (NMT) this month to experience Ghosts of Brewers Past, a collaboration on a winter ale with some of NMT’s former brewers and brewer’s assistants.

The brewery, located at 522 E. Dunlap Ave., first opened in April 2013. The group of seven past and present brewers came together on Nov. 19 to create the mash, putting in some of the ingredients that they associate with the season, including: dates, gingerbread, Piloncillo (Mexican brown sugar), hard candies, potatoes, cinnamon sticks and pine cones. Yes, pine cones (they were just given a short soak, more for the symbolism than anything).

More “spice” was added near the end of the fermentation period, including maple syrup, more cinnamon and ginger. The beer should be available at the restaurant through the end of January. For more information, visit www.northmountainbrewing.com or call 602-861-5999.