By Marjorie Rice
The first thing to know about RedThai is that it isn’t a “Thai” restaurant. Instead, think Asian fusion – a Southeast Asian culinary journey that picks up souvenirs along the way in Vietnam, Thailand, Burma (now Myanmar) and Cambodia. 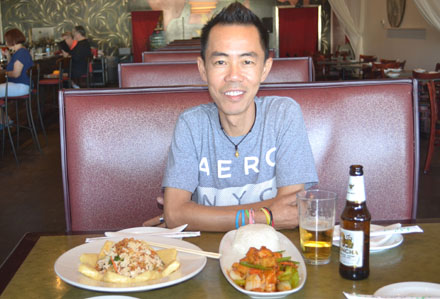 And forget the typical Thai décor of ornate frescoes, elephants and golden Buddhas and instead think edgy Roosevelt Row vibe – an enormous Thai-inspired mural on the back wall, high ceilings and a changing display of art by locals. Now match it with an ongoing video splash of anime over the long bar (where the mixologist stirs up a montage of specialty martinis). The anime is for the kids – this is a family place – and the martinis are for the grownups.

At the back, there’s a spot for a DJ Friday and Saturday nights and live jazz on Sundays. There’s also a small patio out front, which should be lovely once temperatures drop a bit.

The latest dining incarnation by chef Johnny Chu and his wife, Linda Quach, RedThai is tucked into an unassuming shopping plaza at the corner of 12th Street and Dunlap in the home of a former Chinese buffet. The full name is RedThai Southeast Asian Kitchen, and it’s just that – an amalgam of flavors.

RedThai opened five years ago. Chu says he chose the location because it’s near home. Also, he wanted to move from downtown.

“Downtown has changed so much,” he said. “It was tough for an independent business. The parking was a big issue. Now it’s getting better, but back then it was really confusing.”

“I have three girls and I want to have more time with them,” he said.

The choice of décor is deliberate, Chu said. He and Linda chose the muralist and friends from Chu’s downtown stints created all the art decorating the restaurant.

“I don’t think people expect a Thai restaurant with this kind of style,” Chu said. “A lot of people think that because we’re north of downtown that it’s suburban. It’s not like that. We just wanted to create a fun place where everyone can hang out. Everyone is welcome, just bring an open mind.”

Quach manages the front of the house while Chu is in the kitchen. He was born and raised in Hong Kong in a family with a restaurant tradition and moved to the United States as a teen in 1991.

“Most of the dishes have been around for a while,” Chu said. “I created most of them, finding the better ingredients and sauce to go with them. As an artist, I just want to create. My concept is not just Thai. I don’t like to label food. The ingredients are in the Southeast Asian kitchen. The flavor reflects what I believe in – the best ingredients, not much sugar, not too salty, everything cooked at that moment, to order. I wanted to change things, to be a chef, an artist, not just a cook.”

For customers who aren’t familiar with Chu’s cooking and want to sample, there’s a great lunch special menu ($8.88) with dishes that also are on the dinner menu (prices there range from $12 to $18). Sugar Cane Pork, a longtime favorite with Chu’s followers, appears, along with Coconut Milk Yellow Curry and Pad Thai.

On a hot summer afternoon, Papaya Salad was a standout, with shredded green papaya, carrots, mint, crisp shallots, peanuts and sweet-and-sour dressing, along with a choice of chicken, tofu or shrimp.

House Dynamite combines tofu, shrimp or chicken with snow peas, pineapple, baby corn, onion, bell peppers and carrots in a spicy sauce, topped with peanuts. It’s easy to see why this sophisticated take on sweet-and-sour is a customer favorite.

The Pho Ga, with chicken and rice noodles in a glistening pho broth topped with scallion and onions, is a great light lunch choice. In fact, all the soup selections are delicious because of Chu’s masterful broth foundations. Those broths also appear in Shabu Fondue’s menu. The restaurant, next door to RedThai, also owned by Chu and Quach, features savory broths and the diner’s choice of a lengthy selection of meat, seafood, dumplings, mushrooms (up to five types, depending on what’s available at the day’s market), vegetables, tofu and noodles.

All the ingredients are cut to order so the textures and flavors are at their freshest, Chu said. Customers cook the items themselves, simmering them at the table in electric pots.

“It’s all about slow pace,” Chu said. “A place to relax and have fun.”