Building on a legacy of fine Asian dining

By Marjorie Rice
A conversation with George Yang is a journey through nearly a half-century spanning the rise of Asian cuisine in the Valley.

A savvy negotiator, and a master networker with decades-long friendships with business, sports and social leaders, Yang parlayed his connections—along with a reputation for hard work and savvy business skills—to build a string of popular restaurants that have introduced Arizonans to a world of Asian flavors. 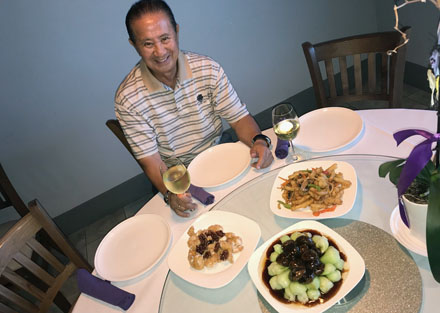 George Yang, owner of George Yang’s Chinese Cuisine, has spent more than 40 years developing a flavor palette that appeals to most everyone, with simply but tasty dishes like, clockwise from left: Shrimp with Honey Glazed Walnuts, Spicy Crackling Calamari (appetizer), and Baby Bok Choy and Shiitake Mushrooms in oyster sauce (photo by Teri Carnicelli).

That world extends from his native Burma (Myanmar today) to China, Thailand, Cambodia, Mongolia and beyond.

Yang also developed a throng of employees who have gone out on their own as restaurateurs and chefs, here in the Valley and in several states.

Today he operates three restaurants. The newest, which opened last December, is George Yang’s Chinese Cuisine at 16th Street and Bethany Home Road. He also owns two George and Son’s locations, in Scottsdale and at the I-17 and Loop 101.

Yang has been a fixture in the Valley restaurant scene since he arrived 45 years ago, aiming for master’s degree at Thunderbird School of Management. Like many students, he took a job in a restaurant—the Golden Phoenix (today the site of his new restaurant). Starting as a bus boy, he rose to server while he got his degree.

“They told me I couldn’t be a waiter because the cooks could only read Chinese. I spoke it but I couldn’t write it,” Yang says. “I said you guys are ridiculous, so I taught the chefs English abbreviations for the dishes—KPC for Kung Pao Chicken, MB for Mongolian Beef.”

After he earned his degree, Yang planned a career in business but his cousin had other plans and asked Yang to partner with him in a place of their own. Yang was performing most of the jobs in the Golden Phoenix, catching the eye of a nearby banker, who would eventually help the young men strike out on their own.

“We rolled the dice and opened a little hole-in-the-wall place in Tempe, the Szechuan Inn,” Yang says. “Back then, most people has no idea what Szechuan was, or even how to pronounce it.” It was an immediate hit, Yang says. “After one month, you had to know me to get in.”

Yang and his cousin later closed the Szechuan Inn and opened four Sesame Inns in the 1980s. Those closed in the 1990s.

“When my son was born, I said I think I’m going to go back into the business,” Yang says. He started George and Son’s in 2000, with a second location in 2013. And Yang’s customers and friends followed him there.

“People would come and say, ‘George, do you remember me?’ or ‘My grandfather used to bring me to your restaurants,’ ” Yang recalls.

When the Golden Phoenix location became available, Yang couldn’t resist another opening. “It’s always been in the back of my mind that the family who owned it might want to retire, and I would like to come here. I’ve still got a little energy left.”

He gutted the original location, creating a setting that is subdued and sophisticated, with sleek banquettes, and a wall of wines. “Chinese food is a great match with almost any wine,” Yang explains, because there are so many flavors in the cuisine.

At his two George and Son’s, flavors of Burma, Cambodia and Thailand meld with traditional Chinese, but at his North Central restaurant, the focus is squarely on China—a decision based on customer demand, Yang points out.

Among the most popular dishes are Shrimp with Honey Glazed Walnuts ($14), a Spicy Crackling Calamari appetizer ($10), Orange Chicken ($13), and Gramma’s Salad ($9), a dish Yang concocted based on a family favorite.

“We want to give our customers food that’s fresh, that’s full of flavor,” Yang says. “And we provide it in a great environment with service that caters to the customers.”