‘Big Daddy’ is back, and so is his menu

By Teri Carnicelli
After more than 30 years in the restaurant and bar business, Dave Smith was ready for retirement. In July 2018 he said goodbye to his popular Big Daddy’s Sports Lounge, located at 10618 N. Cave Creek Road, via a private sale three people he has partnered with for a few years on a barbecue trailer (similar to a food truck, but gets hauled around on a hitch).

Smith still carried the note, and the new owners made monthly payments to him. Until they couldn’t anymore. Which didn’t take very long. 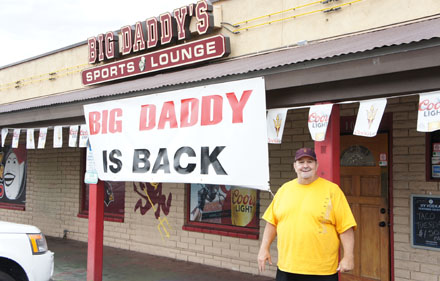 Dave Smith, owner of Big Daddy’s Sports Lounge on Cave Creek Road, wants former customers and new customers to know, he is back at the helm and doesn’t plan to go anywhere anytime soon (photo by Teri Carnicelli).

Not because he decided retirement wasn’t for him—although he admits never really did fully “retire.” It turns out the deal he made with the people who bought Big Daddy’s went south (as did the restaurant’s business), and rather than seeing it fold altogether, he scooped it back up.

Now Smith is in the process of trying to rebuild the business by bringing back his old customers, while working to attract new ones.

Smith first opened a restaurant and bar in April 1986 at 7th Street and Dunlap Avenue, and moved it to his current location on Cave Creek Road in July 2007. He built a strong following, not just with his big personality, friendly staff and more than 50 televisions showing various sporting events (he’s a diehard Sun Devil), but also with a diverse menu of pizzas, burgers, sandwiches, hot dogs and appetizers that can take a bit of time to read all the way through. Whatever you have a hankering for, it’s probably on Big Daddy’s menu—unless you are gluten-free vegan. Sorry, folks.

Part of the problem, Smith explains, is that by September 2018 the new owners has scrapped the multi-page menu that had been developed, via a lot of customer feedback, over the course of many years. In its place was a vastly scaled back menu of mostly barbecue selections. No more pizza. No more hamburgers. No more “bar snacks,” including the hugely popular Wisconsin cheese curds.

In addition, the kitschy memorabilia—mostly sports themed—that Smith had collected over the years and hung on the walls had been taken down.

Not just the menu, but “the vibe had really changed,” Smith said, which left longtime customers feeling uncomfortable and ready to find another local favorite to spend their time and money at. Particularly after almost the entire staff—from servers to bartenders, many of whom had been there for 10, 15, even 20 years—decided to quit.

Smith had re-taken the reigns by the end of January of this year, and within a few short weeks was able to bring back almost his entire staff. The word started to spread: Big Daddy was back.

It didn’t hurt that he also hung a large banner on the front of the building saying as much.

People are slowly but surely starting to return, Smith says, and he himself has come back with a new perspective and a new approach. He admits that he wanted to retire because he was feeling burned out. But now he feels he’s back where he belongs and has had a change of heart—and a change of attitude.

“This place is important to a lot of people. We’re like family here,” Smith says. “People are saying it’s like the life has come back into the place. I won’t be going anywhere anytime soon.”

Even though he’s had a couple more offers to buy the business, Smith says he’s no longer interested in selling. What he is interested in is trying to reach a new demographic. To that end, Smith is looking at social media—Instagram, Facebook, and yes, he’s even launching an app.

Another change is slowing gaining traction—his introduction of “free breakfast,” seven days a week. OK, it’s not exactly free, but it’s still a pretty amazing deal. Come in from 8-11 a.m. and order any drink: a beer, a Bloody Mary, a mimosa, or even just a cup of coffee. You’ll pay $5 for that. But in addition, you’ll get a breakfast of two eggs, a sausage, two strips of bacon, hash browns, and toast. On the menu, that selection alone would cost you $6.99, without a beverage. So it’s a pretty good deal, whatever way you look at it.

The weekly specials also are back, including the half-price Burger Madness on Wednesdays and Saturdays, and a relatively new “Taco Tuesday,” where you get a decent-sized ground beef taco for just $1.50.

And as always, patrons can enjoy a variety of sports packages on the televisions, off-track betting (horses and greyhounds), and NTN trivia against other bars around the country on Wednesday nights. Demonstrate your vocal talents during Karaoke on Saturdays starting at 8 p.m. Happy hour is 3-6 p.m. Monday-Friday.

For more information, call 602-861-1034, visit Facebook at Big Daddy’s Sports Lounge for additional weekly promotions, or go to https://bigdaddysaz.com to view the full menu and the calendar of upcoming sports broadcasts.