Home / Cafe Chat / A ‘clever’ addition opens Across the Pond

A ‘clever’ addition opens Across the Pond

By Patty Talahongva
If you think the name “Clever Koi” is well, clever, then you’ll love the name of the newest restaurant opened by Nicholas Campisano and Joshua James right across the breezeway. It’s called, fittingly, “Across the Pond,” or ATP for short. 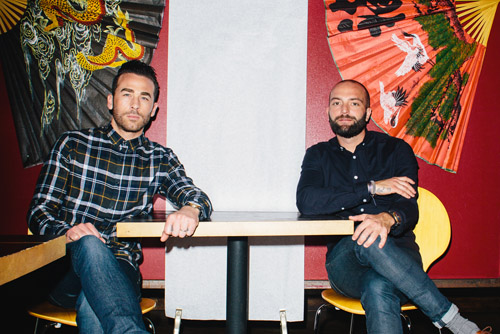 Nicholas Campisano (left) and Joshua James, the two partners behind Born and Raised Hospitality Group, jumped on the chance to open a small cocktail and sushi bar across the breezeway from their popular Clever Koi restaurant on Central Avenue (submitted photo).

This 35-seat space tempts with a compact, ever-changing menu of eight different cocktails plus an extensive selection of Japanese whisky served in the traditional Japanese style, craft beer and wine, all paired with an innovative menu of traditional Japanese-style sushi hand-rolled by chef Alvaro Salinas.

Clever Koi, 4236 N. Central Ave., suite 100, opened in 2013 with four original partners. Today, it’s just Campisano and James who are left from the original partnership, now called Born and Raised Hospitality, and their business is booming—even more so with the addition of ATP.

Campisano says they wanted to “…create an environment to have a good time.” That model has worked for the partners so well that when the adjacent space became available, they jumped at the chance to open a cocktail lounge that features sushi.

Across the Pond is in Suite 101 (formerly the home of Central Wine), and the atmosphere “is nice, it’s a good vibe,” says Campisano. 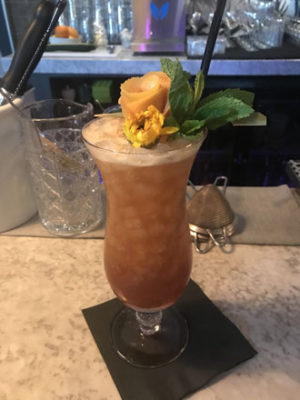 Guests can enjoy a cocktail at ATP while waiting for a table at Clever Koi. Some of the whimsical cocktail names include, “Almost Always Bad News,” which features rum swizzled in a glass and garnished with mint and an orange twist. Beer, wine, and sake also are available.

The décor in ATP mirrors the décor in Clever Koi, especially with the wicker basket lights. Their liquor license also allows guest to bring drinks from one establishment to the other. “We were blessed to take over this space,” Campisano said.

While the menu at Clever Koi changes with the seasons, there are some customer favorites such as the Porkbelly steamed buns, which Campisano calls “amazing.” There are also vegan and gluten-free dining options. Chef Anthony Dang created the Dan Dan Noodles, a vegan dish that has become another customer favorite.

Kids are welcome to dine and the partners keep a stack of coloring pages ready for the youngsters. Quite often they pin their art on the community board after they finish dining. The children’s menu isn’t printed, so just ask your server for the daily options.

Campisano is from Tucson and now lives in the North Central area. Work took him first to California, where he and a friend opened their first lounge in San Francisco when he was 22. James graduated from North High School and worked in restaurants as a bartender. The two met when they both worked at The Parlor on Camelback Road. James also lives in the North Central area. 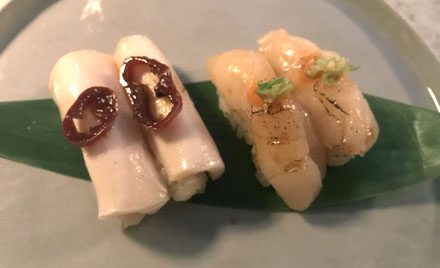 Fresh sushi selections at Across the Pond (photo by Teri Carnicelli).

“Nick and I are both very hands-on owners who work side by side with all our employees,” says James. And while they can both pitch in on every job, “By no means am I a cook,” cautions Campisano with a laugh.

“If there is a take away from both Clever Koi and ATP, it would be that we strive incredibly hard to have the most knowledgeable and educated staff in Phoenix,” says James. “All our servers, bartenders and cooks go through a rigorous training process to ensure 100-percent knowledge of our products and, most importantly, our culture of hospitality.”

That culture shows, as they have a steady stream of local regulars. “This is a people business,” says Campisano, “people taking care of people.” They also do their part to take care of the environment. They compost at all of their restaurants and their to-go containers are recyclable.