By Colleen Sparks
Not many people living today can say they knew the late Dwight D. Eisenhower before he became president. A local veteran not only served under him during World War II but also played a critical role in ending the monumental conflict. 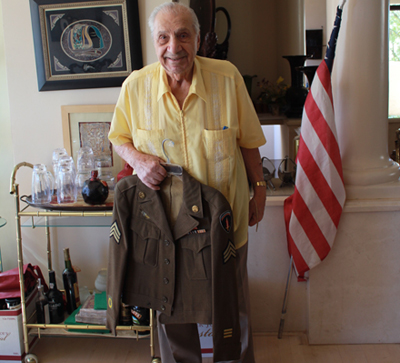 Gregory Melikian, 95, who retired as a brigadier general from the Air Force Reserves, is known as a peacemaker because he sent the coded message to the world in 1945 saying the Germans had surrendered during World War II (photo by Colleen Sparks).

“I’m known as the peacemaker,” Melikian said. “Eisenhower said, ‘I want Melikian to send the 74-word coded message to the world.’ We were expecting it but we were still happy that it’s finally happened. Guys like me without brothers and sisters, I thought, I’m going to get home again in one piece.”

As Veterans Day, Nov. 11, approaches, Melikian is grateful for the life he has lived and frequently shares the details of his World War II service. A husband of 65 years to Emma, as well as a father of four adult children and three grandchildren, he has visited France several times. In November of last year, The Greatest GENERATIONS Foundation took Melikian and five other World War II veterans to Reims, France, to participate in the commemoration of the 100th anniversary of the armistice that ended World War I in 1918.

Melikian was honored to sit at the table where generals negotiated during World War II and he has a great deal of respect for the five fellow World War II veterans who accompanied him in November, as they saw combat.

“My five other colleagues, all in their 90s (now) started it in 1944 on the beaches of Normandy and I ended it,” Melikian said. “I have the highest regard for them.”

Melikian, who is multilingual, has earned his own share of praise. Melikian was inducted as Chevalier (Knight) in the French Legion of Honor and received the 2013 Ellis Island Medal of Honor award given by The National Ethnic Coalition of Organizations (NECO).

In 2008, Arizona State University President Michael Crow awarded Gregory and Emma Melikian the University Medal of Excellence. The couple taught languages for many years and supported ASU’s Critical Languages Institute, which was founded in 1984. The Melikians made a gift of $1 million that prompted the expansion of ASU’s Russian and East European Studies Center, a unit in the College of Liberal Arts and Sciences that was renamed The Melikian Center: Russian, Eurasian and East European Studies in 2007.

Melikian, whose father escaped the Armenian genocide in the Ottomon Empire, speaks Armenian, French, Farsi, Spanish and English. Born in New York City, he earned a law degree at St. Lawrence University. After World War II, he worked as a real estate attorney and then a night court judge in New York City. He also began buying and selling commercial buildings in New York and then in Arizona in the 1950s. In 1969 he and his family moved to Arizona.