By Madeline Ackley
About two years ago, the Phoenix Police Department launched a pilot program called “Virtual Block Watch” in the Maryvale precinct and just over a month later the program was expanded to all of Phoenix. 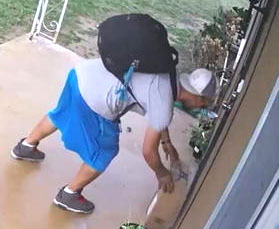 North Central resident Georgie Cherry’s security cameras on March 10 captured this man stealing a delivered package from the front of her home. She shared the video with the Phoenix Police Department (photo courtesy of Georgie Cherry).

The purpose of the program is to streamline the process of police obtaining footage of potential crimes from the community. It allows businesses and residents to register their existing security cameras with the Phoenix Police Department.

“What we’re trying to do is reduce the time between when a crime has occurred and the identification and location of a suspect,” said a Phoenix Police Department spokesman, Sgt. Vince Lewis.

When a camera is registered, an icon appears on a digital map, allowing police to quickly identify cameras that may have captured criminal activity in an investigation. The department estimates that there are over 26,000 devices registered with the program to date.

“There are cameras everywhere,” said Lewis. “[We’re] leveraging that pervasiveness of those video cameras to help solve crime.”

The department can’t directly link the Virtual Block Watch program to a reduction in crime, but Lewis does attribute the prevalence of security cameras, and a growing awareness of property crimes like porch theft, to the decline.

“So many people are sharing and uploading their home surveillance … It’s almost as if now the criminal has no reason not to believe that they are being taped,” Lewis said.

Despite the growing usage of home security cameras, some Phoenix residents are not seeing the benefits.

Georgie Cherry and her family relocated from Washington state to the Sunnyslope area a few years back. They now live in an old family home near 13th Ave and Hatcher Road. Since moving to Phoenix, they’ve had issues with crime.

Cherry had the cameras installed because she says they make her feel safer, but she knows they come with limitations. “They’re a deterrent for sure, but they are not completely safe … they keep honest people honest.”

Recently a man walked right up to her porch and stole an Amazon package in full view of her cameras. “I wish I could have seen [his] face when he opened the box to find a set of sheet[s],” Cherry posted on her neighborhood’s Nextdoor site.

She shared the footage with police, but as far as Cherry knows, they have not yet identified a suspect.

Civil liberty organizations such as the ACLU argue that surveillance devices may not deter people from engaging in criminal activity, but simply push that activity elsewhere. But Lewis sees the Virtual Block Watch program as just one more tool to connect citizens with law enforcement.

Phoenix residents who wish to sign up for the Virtual Block Watch can do so at the department’s website, www.phoenix.com/police. It does not give them direct access to your video feed, it only alerts the department that a camera is installed on your property.

Editor’s note: Madeline Ackley is a student at the ASU Walter Cronkite School of Journalism and Mass Communication.