The Phoenix Veterans Affairs Health Care System on April 30 accepted the donation of an exoskeleton valued at $200,000, to be used in the rehabilitation of patients with spinal injuries. The gift was made possible by SoldierStrong, a national nonprofit organization dedicated to providing advanced medical technologies to veterans. 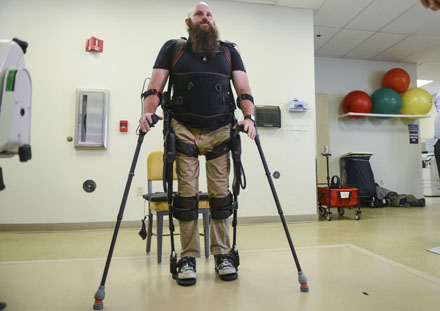 Dan Rose, a U.S. Army veteran who was paralyzed by an IED in Afghanistan in 2011, demonstrates how a robotic exoskeleton can help him not only stand, but walk as well (photo courtesy of the Phoenix Veterans Affairs Health Care System).

This donation will help with rehabilitation of veterans with spinal cord injuries, allowing wheelchair-bound veterans to walk. It can be programmed to adjust to each individual user’s injuries. Up to eight rehab patients per day can perform their physical therapy in the “suit.”

U.S. Army reservist and combat engineer Dan Rose, 34, was paralyzed from the waist down when in 2011 his truck ran over a culvert packed with explosives in Afghanistan. He was told he would never walk again. Undeterred, the Purple Heart awardee began competitive wheelchair sports such as rugby, skiing and sled hockey.

His first encounter with a robotic exoskeleton came in late 2016 during a visit to the Milwaukee VA Medical Center’s Spinal Cord Injury Center. There, he was able to participate in a demonstration of the exoskeleton, trying it on and walking for the first time in years. A few months later, he received a call from SoldierStrong that said he was chosen to receive an Ekso GT exoskeleton.

He was happy to demonstrate how it works during the April 30 presentation at the Carl T. Hayden VA Medical Center—and later that day, throw out the first pitch during the Diamondbacks-Yankees baseball game.

A fan of make-believe characters like Robocop and Iron Man, Rose says, “the fact that this suit is a reality, is amazing. I’m blown away by it.”