Few social clubs survive long enough to celebrate their 40th anniversaries, but one local organization will do just that this month. 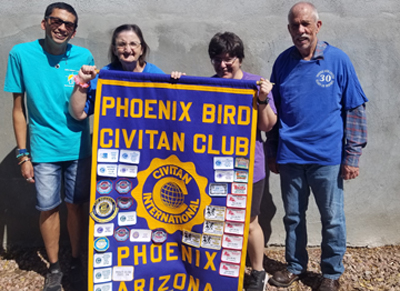 Members of the Phoenix Bird Civitan Club from left: Lance Kleckner, a current officer, Francis Diaz, a current officer, Esther Alper, who just started her term as president on the board Oct. 1 and Dan Rich, outgoing president and charter member, pose by a banner. The club will celebrate its 40th anniversary on Oct. 15 (submitted photo).

The club is part of Civitan International, an organization with community service clubs in more than 35 countries focused on helping those with developmental disabilities. The Phoenix club got its start when local insurance salesman Don Poppe, who was governor of the Civitan clubs in Arizona and New Mexico, was approached about starting a club that would include men and women who had special needs among its leadership.

“There was lots of paperwork and questions as to how this would all work,” Poppe said. “Then they said the clincher: Joyce Ridge would be in charge. That’s all it took to say ‘yes.’”

Ridge, who since has passed away, was executive director of Lura Turner Homes, Inc., which provides adults with disabilities with a safe, enriching, loving family environment. Under Ridge’s direction, Lura Turner Homes became the sponsor of the Phoenix Bird Civitan Club.

The club’s immediate past president, Dan Rich, was a charter member.  He has stayed with the club because he enjoys attending its monthly programs and participating in its many volunteer projects. Esther Alper became club president Oct. 1.

The Phoenix Bird Civitan Club meets the first and third Tuesdays of the month at 4:30 p.m. at ARCH at 1550 W. Colter St.