By Teri Carnicelli
If you’ve lived for any length of time in Sunnyslope, you have heard the name Winifred Green. Maybe you’ve seen her speak in front of the Phoenix City Council. Maybe you’ve driven by the park at 17th and Peoria avenues that bears her name. 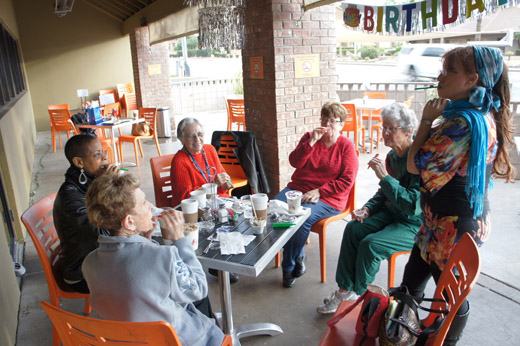 Or maybe you’ve popped into Antique Outpost and found Green behind the counter—where you can find her on most days since she and her husband, Frank, opened the shop in 1967.

Green, who turned 90 last month, shows little sign of slowing down. When asked about retirement, she shoots back, “Why should I? What else would I do?”

Green is originally from West Virginia and moved to the Globe/Miami area in the early 1950s, before moving to Sunnyslope around 1960. She is one of the founding members of the Sunnyslope Village Alliance (SVA), and served as its first woman president in the early 1990s. She also was the first president elected to a two-year term instead of a one-year term.

She was active in the Sunnyslope Historical Society for many years and still attends meetings and programs at the History Museum.

Over the years Green has served in many volunteer roles, including various block watch and neighborhood Fight Back programs, community improvement projects through First Christian Church, and she served as chairperson for the citizen advisory committee that was instrumental in the development of “her” park’s master plan. Of course, at the time she had no idea the city was going to name the park in her honor.

The city built the park on a blighted dirt lot next to the Sunnyslope Youth Center and named it after Green in March 2007.

If you ever want to chat with Green about the area’s history, or are just looking for a unique gift or a conversation piece, stop by Antique Outpost, 10012 N. Cave Creek Road, Wednesday through Saturday from 10 a.m.-5 p.m. For more information, call 602-943-9594.