By Teri Carnicelli
A Maricopa County Superior Court judge on Jan. 10 will hear arguments related to a motion to dismiss a lawsuit filed against the owners of a proposed medical marijuana dispensary at 1616 E. Glendale Ave. Also named in the lawsuit are the city of Phoenix, and the Phoenix Board of Adjustment. 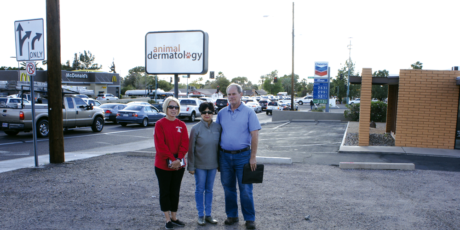 Julie Karasek (left), Helen Houser and Eric Thomas, residents of the Monteil neighborhood at 17th Street and Glendale Avenue, have been fighting a medical marijuana dispensary proposed for an animal dermatology clinic at 1616 E. Glendale Ave. Karasek and Houser have filed a lawsuit in Maricopa County Superior Court (photo by Teri Carnicelli).

At issue is a 5-1 ruling made by the Board of Adjustment on April 5 overturning an earlier decision by a Phoenix zoning administrator to deny a use permit and two variances for the medical marijuana facility. The board’s vote effectively gave the go-ahead to Mitchell Song, DVM, the property owner, and investment partner 64 Alpha LLC.

The developers claimed that property suffered under “hardships” that were not of the owner’s making. For example, in 1989 the city of Phoenix used its eminent domain authority to condemn part of the property in order to widen Glendale Avenue. As a result, the property lost three parking spaces and the frontage was reduced to just 70 feet. The size of the lot, small building and limited parking made it difficult to find anyone else interested in buying the property, they argued.

A similar case was presented to the board that had received approval from the Arizona Supreme Court that also argued “hardships” because of a partial property taking under eminent domain. Members of the Board of Adjustment felt there was enough similarity between the two cases to warrant the granting of the variances and use permit.

The lawsuit was filed by Helen Houser and Julie Karasek, residents of the nearby Monteil neighborhood, who argue the Board of Adjustment members were unduly influenced by petitions in favor of the dispensary that they claim were mostly fraudulent, although the board did not give opponents the opportunity to effectively prove that the bulk of the petitions were questionable, at best, and were “dismissive” of their claims.

The two neighbors also felt there was some “undue influence” at play in the board’s decision, given that a group of same lobbyists and activists that had presented before the board in this, and in similar cases had consistently won the day—whether they were in favor of a dispensary, or in some cases, opposed to a dispensary.

“As these cases have come to light, the veracity and impartiality of the (board) has been called into serious question,” they wrote in their complaint.

By law, opponents had 30 days from the Board of Adjustment’s decision to file their lawsuit with the Maricopa County Superior Court. However, the appeal wasn’t filed until May 31.

The lawyers for Mitchell Song and 64 Alpha LLC have filed a motion to dismiss the case, pointing out the lawsuit wasn’t filed in the proscribed timeframe. As for the argument that the Board of Adjustment was unduly influenced by allegedly falsified petitions, making its decision arbitrary and “an abuse of discretion,” the lawyers argue the proof is in the minutes of that hearing.

After making the motion to overturn the zoning administrator’s ruling, Board Vice Chair Yvonne Hunter, who herself is an attorney, pointed out that the board’s role is to deal with the facts that are before them, and they are not able to make their decision necessarily based on who in the neighborhood may or may not have been involved in supporting or opposing the project. While the board does take this information seriously, Hunter emphasized that petitions are not a critical part of the board’s decision-making process.

Generally speaking, the role of the Board of Adjustment is to look at the specific legal requirements of a use permit or variance request, and judge it by those standards.

The chance of an appeal like this succeeding is very low, said Jack Wilenchik, a lawyer with Wilenchik & Bartness Attorneys at Law, which is representing Mitchell Song and Alpha 64 LLC.

“The judge is limited to looking at the decision the board made and determining whether it had a legal basis for its decision, or whether the decision can be judged as ‘arbitrary and capricious,’ with no valid basis for making the decision. That is a tough thing to prove,” Wilenchik said.

If the judge moves to dismiss the lawsuit, the case is over. If he decides to hear further arguments, it could go on for several more months.

In the meantime, the dispensary partners have moved forward with their architectural plans, which have been submitted to the city of Phoenix Planning Department for design review. However, no physical work has begun as yet on the building, which has been fenced off.

“We have a decision, we got our approval in April, so there’s no reason to stop working on this,” Wilenchik said.