When Deng Atem was 8 years old, he ran from the Arab marauders who came to his village, walking from the north of what is now South Sudan to Ethiopia, where he became a refugee, a student, and a child soldier. Atem is one of the Lost Boys of South Sudan. 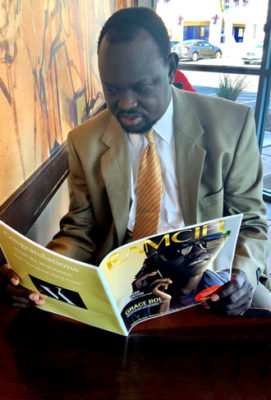 His journey eventually took him to Kenya, to a large refugee camp in Kakuma, where he had a chance encounter with a group of Western journalists covering the crisis. One of the journalists was a Danish man, Jesper Strudsholm, and the other an American, Anderson Cooper. “I realized how important their job was, to keep the world informed, to tell the stories of those who were otherwise unheard,” Atem recalled. “On that day, I discovered a new ambition: to become a journalist.”

Atem wanted to tell the story of his people, his country, and their struggle. “I wanted to tell that story not just to the rest of the world but to our people. I believed then—and believe even more strongly today—we have to share the stories of our struggles and successes.”

Atem eventually came to America with the assistance of Catholic Charities, where he was placed in a foster home in Phoenix. He continues to reside in the North Central area.

He found a job and went to school. Eventually he attended Arizona State University, where he earned a Master’s Degree in Business Administration. He combined his new degree with his youthful goal, launching an online magazine in December 2017 called Ramciel, meaning “intersection” or “meeting point,” for the people of South Sudan. Ramciel is the name given to an area where four of the states of South Sudan intersect.

The inaugural print edition came out in November 2018. Atem took copies to Juba—the capital city of the Republic of South Sudan—and registered his Ramciel Magazine with the Media Authority.

Currently, Ramciel Magazine is published in English, which is the most commonly used language among the diaspora (citizens of South Sudan living abroad). Here in Arizona, there is a Sudanese/South Sudanese population of about 3,000.

Atem hopes to raise enough money to print a second issue, and has started a GoFundPage to aid in that effort. Eventually he would like print copies to be available locally in places such as a South Sudanese-owned grocery store in Glendale, Changing Hands Bookstore, Barnes and Noble Booksellers, and other local distribution points.

He hopes to raise enough funds to begin putting together the next print issue in July. To contribute to Atem’s goal, visit https://www.gofundme.com/ramciel-magazine-launch-its-second-edition-print.