The North Central Phoenix community doesn’t have to look hard to find evidence of the spiritual force and legacy that was The Rev. Dr. Culver H. “Bill” Nelson, D.D., L.H.D.

A simple drive along Glendale Avenue is punctuated by his touch. Travel west and you’ll find The Church of the Beatitudes, which he founded in 1954, and two blocks down from that The Beatitudes Campus, a retirement complex, also founded by Nelson in 1965. Nelson died peacefully April 12, just six days after his 93rd birthday, befittingly at The Beatitudes Campus. 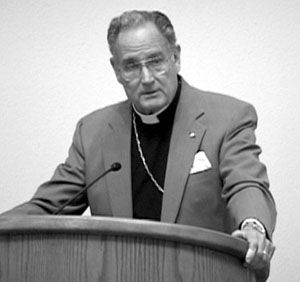 Nelson was an integral part of Phoenix’s social fabric for many years, with contributions in diverse areas such as labor-management relations, the arts, transportation, education, care of the elderly and mentally ill. He was the Founding Minister Emeritus of Church of the Beatitudes in 1954 and the Beatitudes Campus in 1965, from which he served thousands of parishioners and hundreds of elderly citizens.

Nelson possessed incredible insight. Having passed on an opportunity to take over a church in Santa Barbara, Calif., he chose Phoenix, a city of just 90,000, knowing it was poised for growth—putting him in the right place at the right time. Church of the Beatitudes started in a barn (Bud Brown’s Barn) with 15 people on loan from another Valley church and within six months grew to 300 members. By 1979, Church of the Beatitudes had become the largest active congregation in its denomination throughout the United States.

Rabbi Albert Plotkin, a prominent Valley religious leader who passed away in 2010, characterized Nelson as “a scholar of great depths and a man who had sought to constantly improve the spiritual quality of our community.”

Largely observed and certainly unadvertised, Nelson became the city’s mentor and conscience of the Phoenix vanguard, and also served on numerous boards, commissions and committees—both religious and secular.

Ever-vigilant of the elderly population’s needs, Nelson aligned Church of the Beatitudes with another nonprofit, Beatitudes Center DOAR (Developing Older Adult Resources), which later changed to Duet: Partners In Health & Aging in 2009. Duet has grown to one of the largest of its kind in the nation, with outreach programs and free-of-charge services to homebound adults, family caregivers, faith communities and grandfamilies.

Perhaps Nelson’s greatest punctuation for residents and visitors alike is The Great West Window, a nearly six-story high, multifaceted stained glass located at the corner of the main House of Worship at Church of the Beatitudes, commissioned by him in 1971.

Whether driving past or sitting within, one is confronted by the stained glass figure of Jesus Christ, hands raised in blessing, with faces and figures in the folds of Jesus’ robe—individuals such as Mohandas K. Gandhi, Albert Einstein and Jane Addams, real persons who have shown in their lives the qualities that Jesus exhorted.

Nelson inspired and impacted many, from bestselling author Barbara Hinske, who based her Christmas novella, “The Christmas Club,” on one of Nelson’s sermons, to each of the thousands of parishioners who shook his extended hand at the door following service each Sunday morning before departing.

Nelson is survived by his three children, Mark B. Nelson, Kirk W. Nelson and Rebecca Nelson Guy; seven grandchildren, and eight great-grandchildren. A memorial ceremony was held at The Church of the Beatitudes on April 23.