Beadle, Henry, and now, Sarmiento. Upward Projects portfolio of real estate, stacked with buildings from some of the most prolific mid-century architects, has added yet another architectural unicorn to its mix with the lease of the Sarmiento-designed Phoenix Financial Center rotunda that houses its new headquarters. 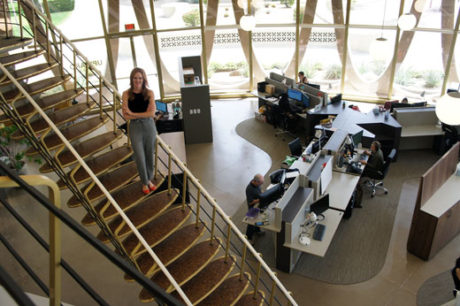 Upward Projects’ co-founder and CEO, Lauren Bailey, stands on the restored floating staircase inside the company’s new headquarters, inside one of the two Sarmiento-designed Phoenix Financial Center rotundas at Central Avenue and Osborn Road (photo by Teri Carnicelli).

The Phoenix-based restaurant hospitality company secured the 8,700-square-foot space in October of last year, and after restoration and renovations moved in to the northernmost rotunda this February. The company signed a seven-year lease, with another seven-year option.

Located on the grounds of the 1960-era Phoenix Financial Center (3443 N. Central Ave.), Upward Projects’ new digs will allow the company, which was founded in Phoenix in 2009, to develop and manage all aspects of the business—including a growing list of out-of-state locations—under one roof, with plenty of room to grow.

Originally designed by modernist architect, W.A. Sarmiento, in 1964, Upward Projects’ co-founder and CEO Lauren Bailey long had her eye on the Phoenix Financial Center and its striking twin rotunda spaces. Starting with the first-ever Postino inside the former Arcadia post office, Upward Projects is built on a foundation of revitalizing historic and architecturally significant spaces, “so the Phoenix Financial Center is the perfect retro-modern home for our team to work in a creative, inspiring environment,” Bailey said.

Previously headquartered inside the former Al Beadle-designed bank that also houses Federal Pizza, Upward Projects’ team was bursting at the seams. This former bank building at Central Avenue and Osborn Road has just the kind of character—and space—that was needed.

But first, a lot had to be removed and restored. Gone are the old carpets, and custom rugs now cover a portion of the polished cement subfloor. The soaring two-story space, with the second story serving as a kind of “loft” that looks down onto the large open first floor, is overflowing with perfectly restored midcentury elements, including a floating staircase featuring surfboard-shaped steps, oversized hanging globe lighting and the original sconces along the walls, all fully restored.

The circular interiors are tucked under a floating dome ceiling decorated with a colorful glass starburst skylight, and the rounded exterior wall sports floor-to-ceiling glass windows supported by upside-down arches.

But you also will find fully modern features, including custom desks that can be raised or lowered, ergonomic chairs, and a small “test kitchen” for research and development of new food offerings for the company’s growing stable of restaurants.