By Colleen Sparks
Jim LaBrie got his start as an entrepreneur early in life, selling newspapers for five cents in downtown Seattle as a fifth-grader.

He has come a long way from those days as the owner of the Bug & Weed Mart, which recently expanded to its sixth store in the Valley. The businesses is a family affair – his son, Joe LaBrie, is director of retail personnel while his daughter, Cara LaBrie, runs the back office, website and point-of-sale for the stores. 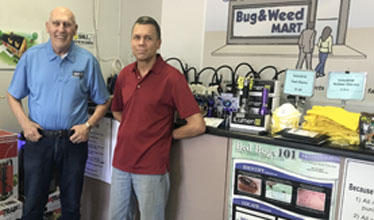 Jim LaBrie, owner of Bug & Weed Mart, on left, and his son, Joe LaBrie, stand in one of the six stores Jim owns in the Valley. Bug & Weed Mart recently celebrated its 40th anniversary and Jim said he started the business out of a need without knowing a lot about pest and weed control (Photo by Cara LaBrie).

The business, which started in 1979, offers professional products, equipment and instruction related to pests and weed control. Last month it celebrated its 40th anniversary with specials, donating $1 from every sale for a week to the Two Pups Wellness Fund.

LaBrie is pleased and still somewhat surprised by the success of Bug & Weed Mart.

“We happen to fall into a niche,” LaBrie says. “Essentially there’s a market for people who want real chemicals to do the job safely and effectively.”

He said the idea for the business began because of a need. He and his wife, Ellin, were living in California with their three children, who were suffering from respiratory illnesses. They moved to Arizona to ease their kids’ health issues but needed products to make their home healthier.

Jim, who began his career teaching and also worked as a proofreader at The Arizona Republic and later for 18 years selling pharmaceuticals, said he could not afford to hire a professional pest controller for the family’s home. He came across a man mixing chemicals for pest control in his garage and he tried it.

He then discovered a do-it-yourself retail store in Mesa specializing in bug and weed control was for sale. Though he didn’t know much about the industry, he believed he could do a better job than the current owner.

“It was a learning experience,” Jim said. “I never expected it to last as long as it has.”

Jim and his staff focused on teaching customers how to use bug and weed control products themselves and by 1982, the business had expanded to three stores in the East Valley and sales steadily increased every year. In 2010 Jim and his team opened a location at 5030 N. Central Ave. near Jim’s home in north central Phoenix.

Today, the experienced staff members at all the locations aim to offer friendly and easy-to-understand information on every aspect of independent pest and weed control. Customers can find products to help with battling just about any type of pest. The stores carry bed bug mattress protectors, dusters, hose-end sprayers, back-pack sprayers, granulators, black lights, gopher probes, dust masks, gloves and many other products.

Outside of work, Jim, 81, volunteers for The Society of St. Vincent de Paul out of St. Francis Xavier Parish, delivering meals to homebound people and doing whatever else is needed. He also volunteers with Catholic Charities Community Services, helping the organization provide low-income housing to those in need, support shelters for domestic violence victims and other outreach. He and his wife now have six adult children and five grandchildren (with a sixth grandchild on the way).