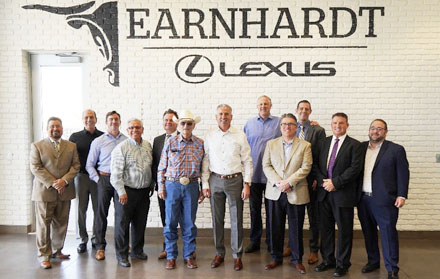 Representatives from the city of Phoenix, including (from left) Councilman Michael Nowakowski and Councilman Sal DiCiccio, paid tribute to the Earnhardt family and its sales team for their business longevity and their community activism (submitted photo).

Tex Earnhardt, the Earnhardt family, and the entire staff at Earnhardt Lexus recently were honored by representatives of the City of Phoenix Planning Department, Camelback East Village Planning Committee and members of the Phoenix City Council.

The Earnhardt team was gifted with a plaque commemorating the outstanding contributions they have made to the city of Phoenix and Camelback East Village.

Councilman Sal DiCiccio, who represents District 6, spoke about the incredible transformation of the area around Earnhardt Lexus since the Earnhardt family stepped up to relocate their dealership from Scottsdale, and the incredibly positive impact they have made on Phoenix.

“Before they ever sold a car, Earnhardt invested millions upon millions of dollars in the city of Phoenix. And people forget what a risk it was—no one else was stepping up to do this kind of thing here, and now this area is growing tremendously, with huge new investments all up and down the Camelback corridor.”

Earnhardt Lexus and the Earnhardt family also have aided the local community through their many charitable efforts, including $240,000 Earnhardt recently donated to Phoenix Children’s Hospital.

“Earnhardt Lexus and the Earnhardt family … have created over 100 good-paying jobs, transformed a once-blighted streetscape, and continue to work to improve the lives of everyone around them,” DiCiccio said.