By Kaylin Dunnett
Coworking spaces, buildings in which remote company employees and entrepreneurs rub shoulders despite being in diverse professions, are growing in popularity in North Central Phoenix. 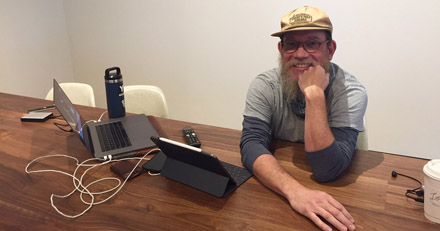 Doug Bell, co-owner of BrandLoyal & Co., envisioned the coworking space he and Alex Leiphart created at 5210 N. Central Ave. as a collaborative place that will draw creative entrepreneurs and artists from all over the Valley (photo by Kaylin Dunnett).

One such collaborative coworking space is BrandLoyal & Co., the business brainchild of Doug Bell and Alex Leiphart. The two began the business, located at 5210 N. Central Ave., Suite 101, in 2018 with the vision of the space hosting creative entrepreneurs and artists from all over the Valley.

Bell has a 20-year history working with agencies, but first met Leiphart at a party. Bell said that Leiphart showed up at the coworking space where Bell was renting an area, called monOrchid in downtown Phoenix. Leiphart asked Bell if he could share a desk with him. From there, the two began collaborating on projects at the building, something that Bell said was a goal of his after leaving the agency at which he previously worked.

“Since a lot of my friends are freelancers and artists, it gave me an opportunity to collaborate,” Bell said. From there, he and Leiphart began crafting a team, built BrandLoyal, and created the coworking space, BrandLoyal & Co., shortly afterwards.

Bell, said that he does not see BrandLoyal & Co. as having a typical coworking model, preferring to call it a workspace for collaboration.

“Anyone’s invited, but we’re really focusing on the agency people, like artists, designers, architects,” he said. “We’re inviting them to come to this space to get to know each other.”

Bell said he hopes members will work together on client projects.

BrandLoyal & Co.’s client list includes Fox Restaurant Concepts, Tuft & Needle and Agritopia. Membership prices range from as low as $50 a month to relax in the space and use amenities to $375 a month, which gives members access to a dedicated desk with private storage.

Jeff Willmore and Erin Schulze of The Take 2 Group are members who use the BrandLoyal & Co. space for Willmore’s 13-month business and entrepreneurship course.

Schulze, Willmore’s executive assistant, feels that being able to connect with the people around her is an invaluable part of working at BrandLoyal & Co. She works remotely from home, and splits her time between her house and the BrandLoyal & Co. building. Schulze said advantages of working in coworking spaces are “being able to get out of my home environment and connect with people.”

Jessica Siragusa is the community manager for The Grid.Works, a coworking space at 5227 N. 7th St. Memberships for that space formally opened in October of last year.

Siragusa said that advantages of using a co-working space include not having to purchase one’s own office supplies and cleaning services and being around other people.

“If you spend too many years sitting in your house and not being around people, you get forgotten,” Siragusa said. “If something happens in your industry, and you can’t get another job, you have no way of meeting new people, or knowing anybody who could help you get another job.”

She said members at The Grid.Works frequently give advice to other members depending on their specific expertise. Their membership includes various real estate companies, a remote worker for a trucking company and a medical student.

Eric Knott, a professor in the Department of Management and Entrepreneurship at Arizona State University, echoed Siragusa’s thoughts on co-working spaces.

“While working from home has some enamor, there is an impression that people want to interact with others, even if (those people) are not directly related to the nature of what they do,” Knott said. “It’s difficult for larger businesses to promote and recognize employees who work remotely.”

He added that remote workers and people who work from home may feel that their careers are not progressing at the rate of their office-working counterparts.

“Although the millennial generation made the push to work remotely, they weren’t the first, but were the most successful… we’re seeing them want to come back (to office workspaces),” said Knott, who added that millennials may be noticing the success of peers in the office promoting faster.

Editor’s note: Kaylin Dunnett is a student in the ASU Walter Cronkite School of Journalism and Mass Communication.