By Deanne Poulos
At age 90, Dorothy Flood is older than many of the antiques she sells. Currently, she keeps a booth at Antiques on Central, located in the Bashas’ shopping center on 7th Street and Missouri.

“The business has changed,” she explains. “It’s a lot of collectibles. If you have a good piece by a well-known maker like Tiffany, or sterling silver, it doesn’t have to be a hundred years old. We don’t want it brand new that you can go buy in a department store.” 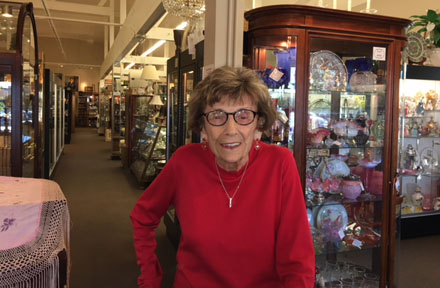 Dorothy flood, 90, still works two days a week at her booth at Antiques on Central, because, as she says, “The antique business is kind of a disease. You don’t get over it. There’s no cure.” (photo courtesy of Terry Flood).

Flood has been involved in local antiquing since she moved to North Central Phoenix with her husband and three children in 1964. After her youngest daughter graduated from Xavier College Prep, she and three partners, who worked on the Xavier Boutique together, opened their own shop in the late 1970s.

Ultimately, she and one of the partners kept the business running for 14 years at two locations, both near 7th Street and Bethany Home Road. Since they closed their shop, Flood has rented booths in several antique malls, all in the North Central area. “The antique business is kind of a disease,” she laughs. “You don’t get over it. There’s no cure.”

Currently, at Antiques on Central, she says people like to come browse because it brings back memories. “Mother had this or grandmother had that, and they remember it as a child.”

Widowed for more than 17 years, she lives in the same North Central home, which is overloaded with items she might sell at some point.

“I have to be careful what I buy,” she explains, “so I can make a little money on it.” She has to rent her booth and pay commission on what she sells. “By the time you’re finished, it’s hard to make any profit. But I love the business. It’s just in your blood to love pretty things.”