Phoenix Union High School District’s Phoenix Coding Academy, in its first year of robotics competition, came away with a wealth of experience—and some awards. 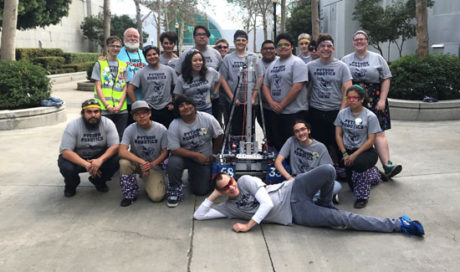 The Python Robotics team won the Rookie All-Star Award at the FIRST (For Inspiration and Recognition of Science and Technology) Los Angeles Regional, held March 15-17 in Pomona, Calif.

Python Robotics brought 15 Coding Academy freshmen and sophomores (and a foreign-exchange student from Central High) to the regionals. Of the 54 teams that participated, the Python Robotics team ranked 15th in qualifying. The team also was scouted by higher-seeded teams, and was asked to be in an alliance with one of the top-eight teams. That three-team alliance beat the No. 1 and No. 2 seeded teams, and made it to the quarterfinals where they were ultimately eliminated.

The Python Robotics team was able to raise funds to take about half of the members to the World Championships in Houston, held April 18-21.

Coding Academy has been no slouch when it comes to funding the program. The team secured a grant from NASA and Boeing to help them get to regionals, and several in-kind donations from other companies. The students also aggressively promoted the Education Tax Credit program, in which donors can contribute up to $400, and receive a tax credit in the same amount.

“For the World Championships trip, I contacted all of our corporate sponsors, we held a car wash and a video game tournament, and promoted the Tax Credit program on our social media,” Coach George Cardenas said. “Unfortunately we were only able to only take a little over half the team and we had to drive.

Houston was a bit humbling, as the Pythons and their robot, Snaaaaaaaaake! finished 66th in the Galileo Division. According to Cardenas, the team faced a number of mechanical issues, and very tough competition from experienced and established teams.  “But the team still persevered and managed to hold their own,” he pointed out.

“These kids have been incredible. They are only freshmen and sophomores and they are amazing. It was our intention that this year would be a learning experience, but they blew it out of the water. They were the highest-ranked rookie team, and earned high marks for their presentation to judges and their community service.”

Team members have their sights on attending the world championship next year. But they won’t sneak up on anyone anymore after an amazing rookie season. To see a video of one of their competition, or to make a Tax Credit donation to the team, visit www.pythonrobotics.org.