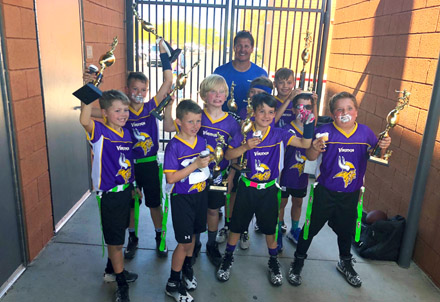 Members of the Grid Iron Flag Football team, The Vikings, celebrate their championship win in the 9-10 Age Division with cupcakes and trophies (submitted photo).

After losing a heartbreaker in their first game of the season, the Vikings rattled off eight straight wins culminating in a dominating performance in the championship game.  After winning a shootout (38-36) in the semifinals, the Vikings gave up a touchdown on the opening drive of the championship, but then scored 27 unanswered points for a 27-7 win.

ONE Sports Nation has a dual focus to prepare the student athlete for the next level of competition and keep them excited about playing sports. The programs and rules have been developed to mimic those of high school sports. For more information, visit https://www.onesportsnation.com/arcadia/football/.