Sherri Johnson gets her preschool class of 3-year-olds settled down on the carpet inside the classroom at St. Francis Xavier School, as her assistant, Heather Halican, prepares the tablet for the next activity. 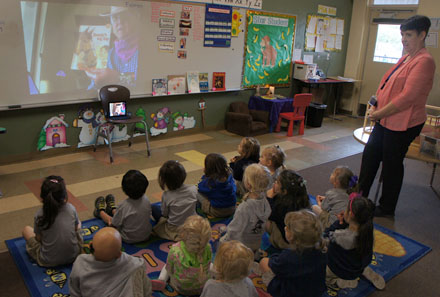 Sherri Johnson, preschool teacher at St. Francis Xavier School, welcomes Tom Barnes, aka “Grandpa Tom,” to her classroom via FaceTime, as he prepares to read the 3-year-olds the story of “Rowdy’s Big Day” (photo by Teri Carnicelli).

Only this is no ordinary activity—it’s a story being read by a student’s grandfather, who is thousands of miles away in Louisville, Ky. Tom Barnes, aka “Grandpa Tom,” will be reading the story to the excited children, live, via FaceTime.

Barnes read “Rowdy’s Big Day,” the story of a boy’s beloved horse competing at the State Fair for the first time, keeping the toddlers engaged by asking them questions like “have you ever been to a state fair,” or “have you seen a horse race,” and “do you like cotton candy?”

At the end of the session, each student stuck a red paper heart with his or her name on it onto the white board to show “Grandpa Tom” they loved him, and his granddaughter, North Central resident Kathryn Tamm, also gave him a big “hug.”

It’s not Barnes’ first virtual visit, nor is it the first time students have visited with family members around the country through a live video link.

Johnson, who has been at the school for six years, came up with the idea after St. Francis Xavier Principal Kim Cavnar at the beginning of the school year challenged all the teachers to come up with a “big idea” that would help bring the larger community into the school environment.

Then in November, the school hosted its annual Grandparents Day Celebration. A child in Johnson’s class had grandparents who could not attend because they lived too far away. That’s when the idea of having them “visit” via FaceTime was born. The call was broadcast on the white board, and the grandfather read a story to the class, even dressing as the character in the book, which the children loved.

Another grandparent later that same month visited virtually as a guest art teacher, leading the students in a fun holiday craft.

“We’ve had visitors from Vancouver, Tennessee, and even had a virtual tour of the helicopter area at a naval base in San Diego,” Johnson said. They also have visited with a Phoenix-area teacher who was hospitalized will an illness for more than two weeks. Johnson says she plans to coordinate with a classroom at a public school in Phoenix to do virtual activities together.

“We can use technology to show these children that there is a bigger world out there, and they can not only visit it be have an impact on it themselves,” Johnson explained. “We also can use the activity to emphasizes some of the virtues the school’s mission statement of Kids for Others, such and compassion and empathy.”

The grandparents also are loving the chance to become part of the classroom, and as the technology become more accessible, Johnson anticipates more grandparents will be signing up for virtual visits.