An old sport, a renewed interest 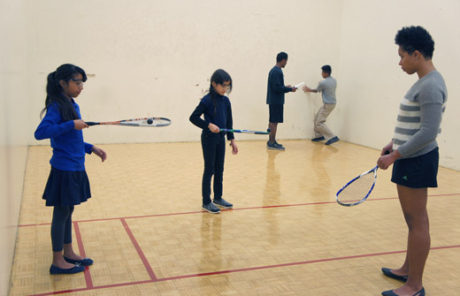 The game of squash was invented at Harrow School in England in the 1830s after racquetball players discovered a deflated ball proved much more challenging to hit. In 1884, the first squash court was built in the United States, making it the second of the now 185 countries where the game is played.

But the sport has never really reached the level of popularity in America that it enjoys across Europe and other countries. One man is hoping to change that—one city at a time.

James Dodson, a recent Chicago-area transplant to Phoenix, has launched Arizona Squash, Inc., a nonprofit that aims to introduce the game of squash to low-income students. The group has partnered with Empower College Prep, a public charter school whose elementary students currently go to school on the campus of North Phoenix Baptist Church, 5757 N. Central Ave.

Dodson is no stranger to the game of squash—both his children have played the game into college—nor is he inexperienced with starting a program from the ground up. Dodson is a founding board member and past board chair of Chicago’s MetroSquash, which opened its $8.3-million squash and academic facility on the campus of the University of Chicago in April 2015.

Arizona Squash, his latest project, is an afterschool program that uses the game to engage underserved Phoenix area youth through academic support, physical fitness and wellness, mentoring, enrichment, and community service. Students from Grand Canyon University will help the fledgling program with its academic support arm.

Empower College Prep fifth and sixth graders in late November tried out for 24 team positions in the new Squash Club, and the church has committed to converting at least two of its old indoor racquetball courts into squash courts—the first one of which Dodson hopes will be ready for action by the end of January.

“We are committed to providing our students with unique opportunities that will help develop their gifts and interests, and I believe that this program exposes them to a global game that can expand not only their cultural awareness but their college opportunities,” said Naquana Mitchell Borrero, director of Development and Community Relations for Empower College Prep.

Arizona Squash, a free program for students, is still in its beginning stages and is looking for financial support from the community to help the program succeed and grow. Funds are needed to purchase equipment for the students (approximately $50 per student) and to complete the court conversions at the church (approximately $60,000).