Washington High School Interactors dedicated a Peace Pole at Growing Together: A Giving Garden on Nov. 17.  They honored the late Jim Green, their mentor from their sponsoring Sun City Rotary Club. Green visited the garden often with the students and worked worldwide on Rotary’s peace initiatives. 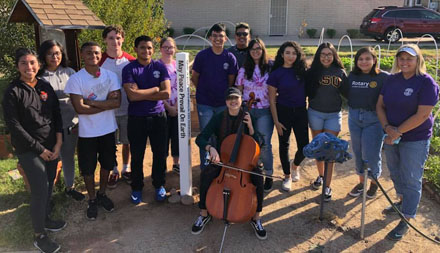 Washington High School Interactors celebrate the memory of former mentor Jim Green with a Peace Pole at Growing Together: A Giving Garden, where Green often visited the garden to work with the students (submitted photo).

“His peaceful spirit was palpable,” Sun City Rotary President Steve Bjornstad said. “He put this spirit into action as a peace advocate in his community and his world. This honor today would have been a humbling thrill for Jim.”

Rotarians, gardeners and students gathered at the community garden located just west of Central on Glendale Avenue to install the Peace Pole in Green’s memory—an international project that serves as a reminder for world peace.

“We were privileged to know Mr. Green, who was such a joyful soul,” Master Gardener Annie Mittelstaedt said.

Green, 82, once said he wouldn’t have missed a Saturday morning at the garden, which gave him a chance not only to harvest some vegetables for charitable donations, but to sit with his “children” to encourage them to make a difference in their world.

“Mr. Green made you feel like you were the only person in the room,” past Interact president Nikole Gomez said. “He was your own personal cheerleader for whatever your goals were.”

Past Interact President Oscar Gonzalez agreed that Green was someone who impacted his life. “For the past five years, Mr. Green was my mentor,” Gonzalez said. “He’s made me a better person and our talks at the garden were inspirational and of course, entertaining.”

Green, who passed away in March, was one of the early sponsors of Washington’s Interact Club, one of the most active Interact Clubs in the nation with over 100 service projects each year.